The Camp Nou Experience, F.C. Barcelona – A morning of football, history and fun

The Camp Nou Experience, F.C. Barcelona – A morning of football, history and fun 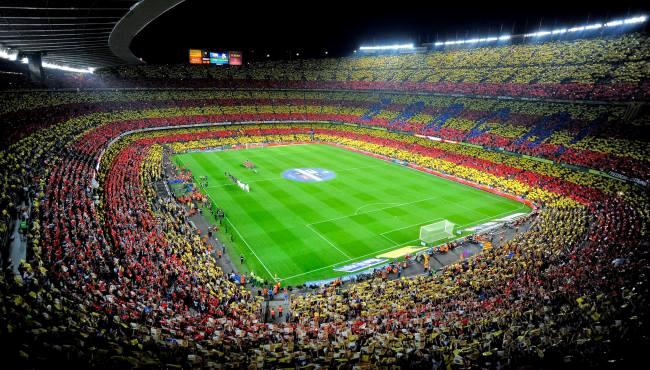 Conveniently situated within easy reach of Barcelona’s city centre, the impressive Camp Nou Stadium is not only the home of the world famous F.C. Barcelona, but is a true paradise for football fans.  Offering an interactive, fun filled experience and exhibiting a wealth of fascinating history, the Camp Nou is an attraction not to be missed.

Futbol Club Barcelona, or Barca as it is known to its fans, is one of the most famous names in the sporting world and has a global following of avid fans.  Founded in 1899 by a group of young foreigners living in Barcelona, the club is now one of the most successful football clubs in Spain, occupying an enviable position at the top of La Liga.  The impressive Camp Nou, situated within easy reach of the city centre, is the beloved home of F.C. Barcelona and is a must see sight for anyone visiting the city.  Boasting a staggering 99,000 seats, with several VIP seating areas, executive boxes and specialist lounges, the Camp Nou is the largest stadium in the whole of Europe and cost a colossal 288,088,143 pesetas to build.  Work on this gigantic stadium commenced in 1954 and was completed by 1957.

The best way to explore this magnificent arena is to book tickets for the ‘Camp Nou Experience’, which is exactly what we did when visiting the city. The tour began in the fascinating FCB Museum where we were met with a huge collection of silverware, a wealth of educational history, an interactive information wall and a collection of video memorabilia.  We continued along our journey and into the player’s tunnel.  Lined with pictures of cheering crowds waving the FCB flag, the tunnel oozed a sense of excitement and anticipation.  We made our way down the fashionably lit steps and out onto the immaculately conserved pitch.  It was here that we realised just how enormous the stadium is and what an unbelievable atmosphere it would be during a match.

Next we were given the opportunity to sit in the dugouts, where the likes of footballing icons such as Messi, Iniesta and Xavi would have sat.  After lots of photo opportunities, we returned inside to explore the Visitors changing rooms.  Access to the FCB changing rooms is not available as part of the tour, as many of the player’s personal items are kept in there.  Following this we were taken into the Press Zones, where the managers and players would give their weekly press releases.  Our last part of the tour consisted of a visit to the multimedia zones, the places where the TV and radio commentators view the game from and where much of the match is filmed.  We completed our experience by visiting the official club shop which sells everything you could possibly think of – from replica shirts to home décor and children’s toys.

The ‘Camp Nou Experience’ took around 90 minutes to complete and is something that we would recommend to anyone visiting Barcelona, not just football fans.  Stadium tours and the museum are open to the public on most days throughout the year, with the exception of certain match days.  Opening times, booking information and much more can be found on the F.C. Barcelona website – www.fcbarcelona.com