Central, stylish, and highly navigable, the Eixample district makes an ideal home base for your next trip to Barcelona. Here you’ll have easy access to the Ciutat Vella and the Villa de Gracia, along with a broad range of local attractions. Eixample is home to the city’s highest concentration of Catalan Modernist landmarks, including the iconic Sagrada Familia and the Hospital de Sant Pau. With its grid-like streets and ample transit connections, it’s hard to get lost in this smartly planned district. All of our Eixample apartments put you in the middle of everything, so whether you’re snapping photos on the Passeig de Gracia or living it up on Carrer d’Aribou, you’ll never be far from home. Below you’ll find our most popular Eixample apartments, and a link to all apartments in the Eixample district. 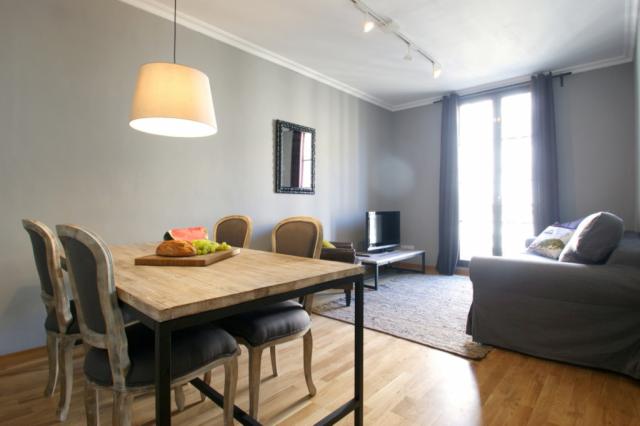 This stylish and charming 1-bedroom apartment is situated in the Eixample district right next to the famous promenade Paseo de Gracia, where you will find Casa Batlló and Casa Milà.
More about: Paseo de Gracia Deluxe A Apartment Barcelona 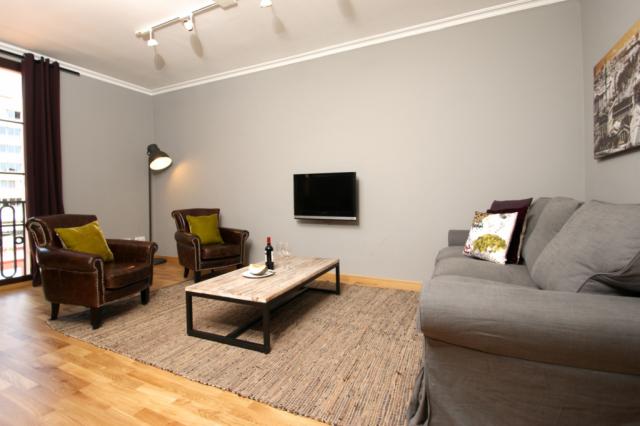 Enjoy an atmosphere of relaxed sophistication in this stylish 2-bedroom apartment in a beautiful historical building in the Eixample district.
More about: Paseo de Gracia Deluxe B Apartment Barcelona 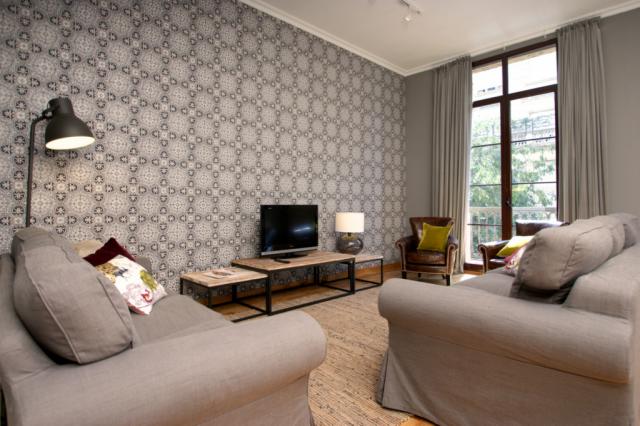 This beautifully designed and spacious 3-bedroom apartment with roof terrace is located in the Eixample district, near one of the most elegant boulevards in Barcelona.
More about: Paseo de Gracia Deluxe C Apartment Barcelona 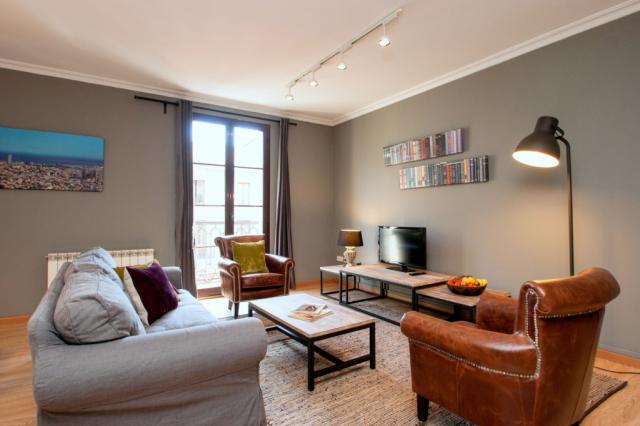 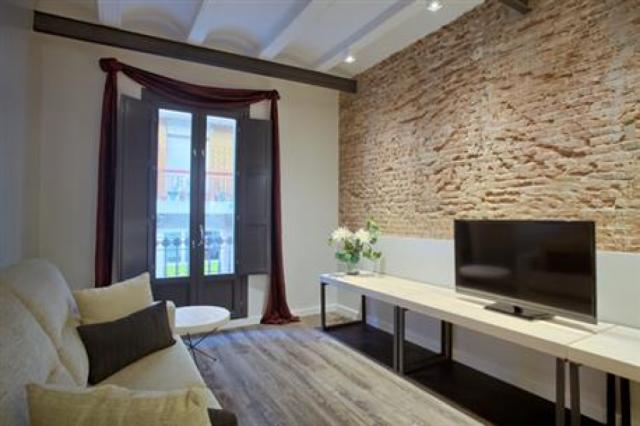 This delightful 1-bedroom apartment is located in a quiet street but just a few meters walk from the world famous La Sagrada Familia.
More about: Sagrada Familia Apartment A 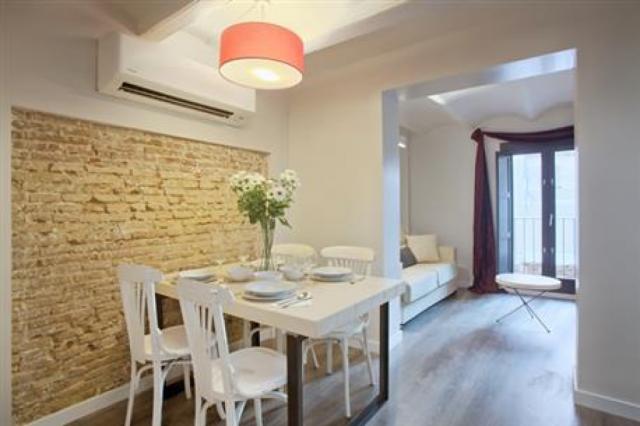 This stylish and cosy 1-bedroom apartment is beautifully located in a quiet street, just a few meters walk from the Sagrada Familia cathedral and Plaza de Gaudi.
More about: Sagrada Familia Apartment C 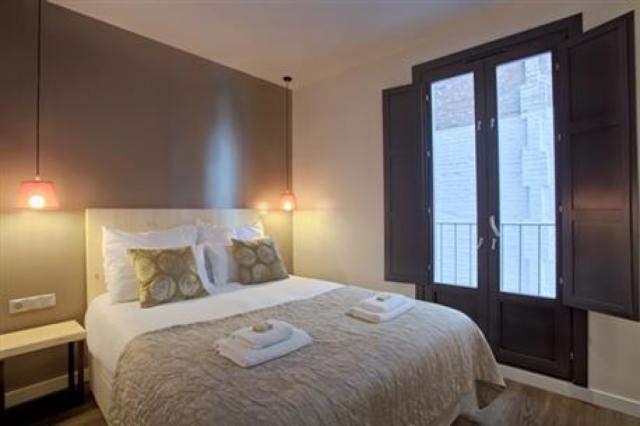 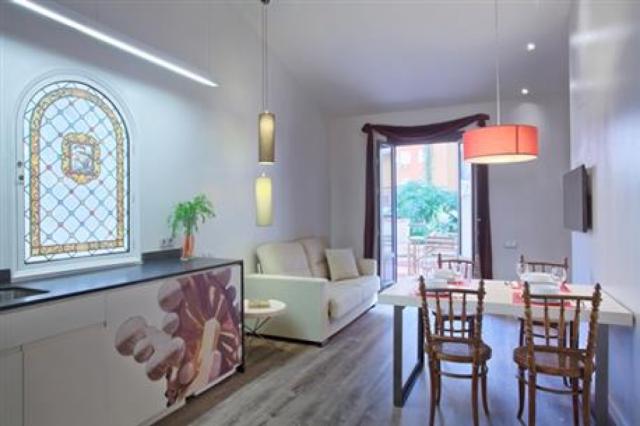 This stylish 2-bedroom apartment with a lovely terrace is located in a quiet street, just a few meters walk from the Sagrada Familia temple and Avenida Gaudi.
More about: Sagrada Familia Apartment G

One bedroom apartment located in a quiet street, just a few meters walk from the Sagrada Familia temple and Avenida Gaudi. Measuring 45 sqm the apartment can house a total of 4 guests.
More about: Sagrada Familia Apartment H

Show all apartments in the Eixample area

From Barcelona International Airport, you’ll have the following options:

From Girona Airport, you’ll have the following options:

From Reus Airport, the following transit option is most convenient:

From Barcelona-Sants Station, you’ll have the following options:

Eixample offers a wide variety of parking options, including:

When you stay in one of our Eixample apartments you’ll be able to fully stock your self-catering apartment with fresh produce and quality victuals from these nearby supermarkets, markets, and grocery stores. We’ve also hand-picked a few exceptional restaurants from Eixample’s many varied options.

The famous Eixample district, or L’Eixample, is not only the largest neighbourhood in Barcelona but also one of the newest, relatively speaking. Constructed in the 19th century, its name translates as ‘extension’, which is exactly what it was designed to be for the city. Taking the strain of the city’s burgeoning population it was created with a distinct confidence and flair. Indeed it was one of the first cities in the world to choose the now common grid-like street structure we see in modern cities around the world. The designers also incorporated wide open avenues striding across the city diagonally and bold new open boulevards. It could not be more different to the narrow winding organic streets of the neighbouring El Raval and the Gothic Quarter. These wide and spacious designs were not just about aesthetics however. There was a practical purpose to them in that they provided excellent ventilation, increased sunlight and an opportunity to create green open spaces in this warm and dry climate. The district is stridently divided by the Passeig de Gracia creating two zones known locally as Esquerra and Dreta. Sadly there is no mystery in their names. They simply mean ‘Left’ and ‘Right’. Eixample is home to world-class art galleries, some of the best restaurants in the city, some fabulous shopping opportunities and most famous of all, some truly iconic 20th century architectural marvels.

It is very important that we do not overlook the architectural influence of Barcelona and the Eixample district. By far the majority of visitors make an immediate beeline for the phenomenal works of Antoni Gaudi. Passeig de Gracia is home to La Pedrera, a uniquely designed apartment block completed in 1911. The name translates as ‘The Quarry’, a cruel nickname from the time of its unveiling that has now taken on a more affectionate tone. A little further south lies Cassa Batlló, a beautifully ornate fairytale-like structure which is particularly popular with children and anyone with a creative mind. It is a perfect example of narrative architecture depicting the battle of St George and the dragon through its exterior ceramic adornments. You can easily identify the characters in the story. Most delightful is the green tiled roof and chimney that signify the dragon’s scales and claws. Inside the winding staircase and gnarly banister perfectly signify the dragon’s back bone. Today the house is a public museum well worth exploring since Gaudi insisted on designing all the interiors and furniture of his buildings too.

All of Gaudi’s constructions have challenged people’s ideas of what might and might not be considered aesthetic, as is surely the purpose of ground breaking design. No other building in the city has pushed these boundaries more than the eternally controversial La Sagrada Familia. Also located in Eixample this is without a doubt Barcelona’s most iconic structure and has come to symbolise the city for many millions around the world. Construction work began on the building in 1882. Gaudi sadly did not live long enough to see his life’s work and life’s love completed however. He is not alone since it remains unfinished today with the latest expected completion date being 2041. Despite its incomplete state it has been added to UNESCO’s world heritage list of protected buildings. Some people adore this unforgettable structure whilst others absolutely hate it branding it an eyesore resembling a mound of melted cheese. Climb one of the towers if you dare. It is certainly not for the claustrophobic or those fearful of heights.

Eixample is also home to the delightful Joan Miro Park where you can grab some peace and quiet from the busy city under the shade of a tree and perhaps enjoy a picnic or a good book. Shopaholics will love the upmarket stores on the Passeig de Gracia including the likes of Tiffany and Gucci. For more affordable fare be sure to explore Las Arenas, a huge shopping centre constructed on the site of a former bullring. Whatever you choose to do, Eixample provides a safe, clean and friendly environment for you, your friends and family on holiday in Barcelona.

A great place to explore from one of our Eixample apartments!

Explore these must sees AND the rest of Barcelona from one of our Eixample apartments, a perfect base for a city stay!