Spend your Barcelona short stay inside the city’s largest and most varied district. Sants-Montjuic is a treat and our self-catering apartments will allow you to explore all the great attractions inside this large area. Find a suitable apartment for you by inserting the dates of your planned visit to Barcelona and clicking on the search button. You can always contact our friendly support team with any questions and then think about packing for a climb up to Montjuic hill, a tour of the national art museum at Palau Nacional or a walk through Poble Espanyol. Below you find our most popular Sants-Montjuic apartments and a link to all apartments in this district. 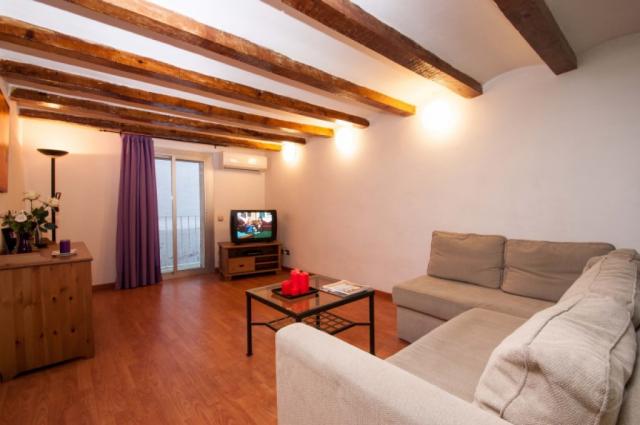 A beautiful two-bedroom apartment (max five people) in a residential area in Barcelona, near the magnificent Monjtuic Castle and Poble Espanyol.
More about: Rustic apartment Barcelona

Show all apartments in Sants-Montjuïc

From Barcelona International Airport you have the following options:

From Girona Airport you have the following option:

From Reus Airport you have the following options:

From Barcelona Sants station you have the following options:

Most nearby parking options are:

Sants-Montjuic is a residential area so food stores and restaurants cater for the locals, which means that you cannot go hungry, whether you choose to eat in or out. Make the best of your self-catering short stay and cook up a feast at your Sants-Montjuic apartments after you return with a bag full of ingredients from the local food stores. When you choose to treat yourself to a night off from cooking you will be happy with the varied local cuisine and the always loved tapas.

The delightful district of Montjuic lies in the south west of the city and is in actual fact a wide hill with a flat top overlooking the harbour below. The eastern side of the hill is a near sheer cliff which provides some incredible views across the city. With its incredible height of 184 metres, it has something of an imposing presence on the city.

For centuries the slopes of Montjuic were used by the neighbouring community of Ciutat Vella for farming and crop growing. Changes came in the 1890s when large areas of woodland were cleared to create parkland. Later, select building began in preparation for the 1929 International Exposition. The impressive Palau Nacional, the Estadi Olimpic (Olympic Stadium) and the ever popular Montjuic Magic Fountain remain today.

Montjuic  is accessible via  several transport options.  You may like to wander up there on foot which can take around 20 to 30 minutes.  A quicker option is to take the funicular railway from Parallel metro station.  The train takes you only some of the way up the hill however.  If you want to reach the castle at the summit  then you will need to climb aboard a cable car from here. The system known as the Teleferic de Montjuïc  transports  four people in its gondola lifts  upwards in around eight minutes. The ride takes you over heights of 85.5 metres is measures 752 metres. A second cable car called the Transbordador Aeri del Port takes you back off the mountain over to the Port Vell Marina and Barceloneta district. It stops at the Sant Sebastian Tower.

There are many places of great interest to explore on this unique city mound. One of the most visited attractions is Poble Espanyol, also known as the Spanish Village.  Built in 1929 for the Barcelona International Exhibition, it was championed as an architectural dedication to art. It was originally designed to last just sixth months for the duration of the exhibition. It proved so popular that it remains today in its complete form. ideal model incorporating the usual characteristics of typical towns and villages on the peninsula. Measuring  49,000 m2 it incorporates with 117 buildings, city squares and streets replicating the typical style of houses and architecture from different parts of Spain. You will discover a host of specialist workshops and craft shops producing traditional hand-made Spanish goods. It is also the location of the famous Flamenco show at Tablao de Carmen which comes highly recommended.

At the fist base of the mountain, where the funicular railway terminates, is the excellent Fundació Joan Miró, a fascinating museum dedicated to the works of Miró himself. . With over half a million visitors every year it is another of the most popular attractions in the city. This art hosts a huge range of Miró’s work going back as far as 1914. There are plenty of his lesser known sculptures, tapestries and early sketches to enjoy as well as his most popular paintings.

If you are particularly touched by the works of Miró then you can also pop along to his final resting place at Montjuïc Cemetery (Cementiri del Sud-Oest) and tell him yourself. This beautiful cemetery measures an incredible 56 hectares  and boasts stunning sea views, beautiful sculptures and cypress trees. Rich and celebrated various figures from Barcelona’s history are buried here.

No visit to Montjuic is complete without experiencing the beautiful Magic Fountain.  This spectacular  display of colour, light, motion, music and water acrobatics is a delight to behold. There are fountain performances nightly but times vary depending on the time of year. Amazingly, the fountains have been jumping since their very first performance in 1929 as part of the Great Universal Exhibition . They remain one of the city’s most popular  fun attractions to this day.

Other attractions on Montjuic are the wonderful Barcelona Botanical Gardens, the fascinating Museum of Ethnology, the Olympic and Sports Museum and the Catalan Museum of Archaeology, all of which are certainly worth exploring.

An area worth while exploring from one of our Sants-Montjuic apartments!

Staying in one of our Sants-Montjuic apartments gives you easy access to all of these fantastic must sees!