Choose one of our La Rambla apartments and experience the vibrant and lively atmosphere on this 1.2 kilometre street that takes you from Catalunya Square down to Port Vell. Filled with crowds and entertainment, day or night this famous street is a popular tourist destination and the answer to an action-packed self-catering short stay. Find out apartment availability and prices by filling in the dates of your planned visit to Barcelona and selecting the search button. Do contact our friendly and professional support team with any questions; they will be happy to help you through the process. Below you find our most popular La Rambla apartments and a link to all apartments in this area. 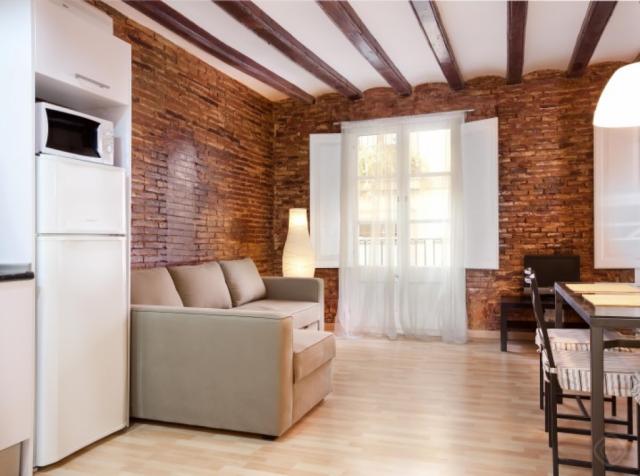 Accommodating up to four guests, this charming and contemporary 2-bedroom apartment occupies a prime position just a short walk away from Barcelona’s famous La Rambla.
More about: Ramblas 4-1 Apartment Barcelona

Show all apartments near Las Ramblas

From Barcelona International Airport you have the following options:

From Girona Airport you have the following option:

From Reus Airport you have the following options:

From Barcelona Sants station you have the following options:

The heart of Barcelona has to feed its thousands of daily visitors so you will find a number of food stores near our La Rambla apartments which will ensure a practical self-catering short stay. Not in the mood for cooking dinner? Not to worry because this vibrant part of the city has an endless list of eateries to suit all tastes and budgets, and we have listed a few of the most raved about restaurants to help you along the way.

No visit to Barcelona is complete without a visit to the city’s world famous street La Rambla. Also known as Las Ramblas, it attracts millions of visitors every year. It stretches some 1.2 km north to south from Plaça de Catalunya, a busy city square to the impressive Columbus Monument located at the city’s waterfront. Back in the 16th century it was a stream that flowed just outside the city walls. By the 19th century the river had dried up and the city walls were torn down and many of the buildings we see today with their stunning architecture were constructed.

This rather magnificent tree-lined boulevard is transformed daily into a manic maelstrom-like market place. At peak times you will find yourself having to fight your way to the stalls due to the sheer numbers of people. Making your way south towards the coastline you will be flanked by mimes, jugglers, buskers and other street theatricals not to mention the famously creative human statues. Try to avoid their eyes or you will find yourself emptying your loose change into their collection boxes. It has to be said that the some people might find the street a little overwhelming and at peak times it is certainly not a good place to visit if you are travelling with young children. As with any busy public place be conscious about your valuables since pickpockets particularly favour this location. Look out for the unusual bird sellers with their singing colourful caged birds. They are particularly popular with photographers. You will find a real cross section of Catalan society on La Rambla as well as a wealth of international visitors to the city charmed by its uniquely vibrant atmosphere.

The street is technically made up of five streets joined together. Rambla de Canaletes, the first Rambla, begins in the north at Plaça de Catalunya, a mammoth city plaza measuring some 50,000 square metres. It marks the point where the oldest part of the city (Barri Gotic and El Raval) meets the newer 19th century Eixample district. It is also the point that many of the city’s other major avenues come together including the famous Passeig de Gràcia, an upmarket shopping street. The plaza is a popular meeting point for locals, visitors to the city and many thousands of pigeons. It is named after the pretty Canaleta fountain here. According to local legend if you drink from the fountain you are guaranteed to return to Barcelona one day. Indeed a local saying “he drinks water from Canaletes” means that the person comes from Barcelona.

Rambla dels Estudis is the second Rambla and is named after the 16th century university, the Estudis Generals. The building was sadly demolished in 1843 but several impressive buildings have survived here. Meanwhile, the extremely ornate 18th century Reial Acadèmia de Ciènces i Arts which was converted into a theatre in 1910 is particularly beautiful. It contains the first public clock in the city.

Heading south the next section of street is the Rambla de Sant Josep. Its name originates from an ancient convent that was sadly demolished in the mid-20th century. It was however replaced by a magnificently colourful visitor attraction known as Mercat de la Boqueria or the La Boqueria Market. Since flower stalls make up a large portion of the market it is also known as Rambla de la Flors or Flower Rambla. The market also sells just about any culinary item you could wish for including honey, cheese, oils, sweets, olives, meats, seafood as well as local and exotic fruit and vegetables. Be sure to take a look at the small plaza, Plaça de la Boqueria which features a magnificent floor mosaic by Joan Miró installed there in 1976. It was the artist’s intention for his artwork to be loved and walked over by the people of Barcelona.

Rambla dels Caputxins follows, taking its name once again from another ancient demolished religious building, this time a Capuchin monastery. Take a closer look at the beautiful Gran Teatre del Liceu, Barcelona’s fantastic Opera House. A little further south on the left hand side of the street (to the east) lies the incredibly beautiful Plaça Reial or Plaza Real, an extremely popular 19th century closed city square formed by some delightful architecture. Enjoy a cool beer, a frothy coffee or a bite to eat in the cafes here and grab some shade under the tall palm trees. The unique street lamps here were designed by the city’s favourite son Antoni Gaudi. Just across the street in the Carrer Nou de la Rambla lies one of Gaudi’s first residential building creations, the Palau Guëll. The ornate mosaic chimney stacks are typical of his later famed designs around the city.

The final original Rambla, Rambla de Santa Mònica takes its name from yet another convent however the building is still in existence, albeit converted into a museum now known as the Centre d’Art Santa Mònica. Most dominant here is of course the mammoth Columbus Monument built in 1888 for the Universal Exposition to mark the site where the intrepid explorer returned to Spain after his first voyage to the Americas. The actual statue stands 7 metres high on top of an impressive 60 metre high column. For just a few euros you can enter the monument and travel up the column in an admittedly very small lift. From the observation platform you have an excellent view across the Rambla and Port Vell.

In 1994 another Rambla was added to open up the street to the sea. Rambla de Mar or Rambla of the Sea is actually a wooden walkway leading you across to a fantastic complex of shops and cinemas including an IMAX theatre known as the Maremàgnum. The area, known as Port Vell Marina, is also home to one of the city’s most popular attractions, the Barcelona Aquarium. Here you can wander through an underwater 60 metre long glass tube and come face to face with sharks!

An area worth while exploring from one of our La Rambla apartments!

Be close to all of these popular must sees as you stay in one of our La Rambla apartments!