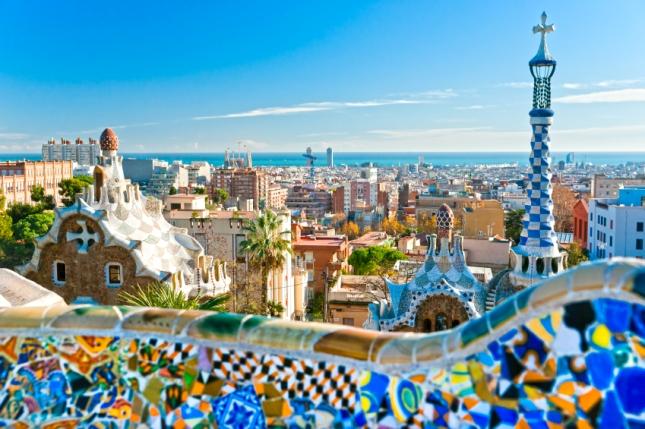 Designed by Catalonia’s most famous architect Antoni Gaudi, and located within the enchanting district of Gracia, Parc Güell is truly one of the most impressive public parks in the world! Though it was never fully completed, the park remains one of Gaudi’s greatest works still mesmerizing visitors with its colorful and playful design. Nearby find one of our Barcelona Gràcia District Apartments.

Parc Güell is definitely one of Barcelona’s most famous landmarks. Pick up any book on Barcelona and you’re bound to come across photographs of, or paragraphs about this park. One of Gaudi’s greatest masterpieces, the park took fourteen years to be built and it was in fact never completed. Commissioned by Gaudi’s patron, Count Eusebi Güell who was a prominent industrialist of the time, the park was originally intended to be a part of an ambitious property development project inspired by the English-style garden-city residences and intended for the Barcelona aristocracy. The work began in 1900 and ceased in 1914, when World War I broke out and it was decided that the development project was a failure.  Only two of the originally planned 60 residential houses were built by that time, but most of the park was nearly complete. Gaudi finally decided to buy one of the two houses for himself and now the house is open to the public as museum called the Casa-Museu Gaudi and containing furniture and other personal belongings designed by Gaudi.

After the project was abandoned and World War I was over, the Barcelona City Council decided to buy the property which they finally did in 1922 and then converted it to a municipal park in the following year. This is the story of how Barcelona became a city with one of the most unusual public parks in the world, which was also declared a Patrimony of Mankind (World Heritage Site) by the UNESCO in 1984.

The park is located on a hill called Montaña Pelada (Bare Mountain) in the charming district of Gracia. While designing the park, Gaudi avoided leveling the ground and instead created a network of twisting roads that follow and compliment the natural contours of the hill. He truly let his imagination loose as he drew on natural forms often camouflaging his artificial structures and making them look more “organic”, such as the famous large stone columns that look almost as if they’re naturally sprouting from the ground.

The first landmark at the very entrance (main) to the park is the smiling dragon fountain that sits on the main steps and invites passersby to pet his intricately and colorfully tiled body. Past the steps, you will come across the centerpiece of the park which is (was intended to be) a large covered market that looks like a magnificent forest of columns (84 of them exactly) holding the roof that serves as a terrace with one of the best views in the city. The terrace itself is surrounded by a continuous and somewhat irregular bench in the shape of a sea serpent and covered with small ceramic tiles of various shapes, sizes and colors. The back of the bench forms a balustrade, and legend has it that in order to make the bench comfortable to sit in (which it is!), Gaudi and Jujol (the bench architect) had their workman take off his pants and imprint his anatomical curve in soft plaster.

The park is filled with amazing stone structures, sculptures and stunning tiling throughout and it would be impossible to describe them all. Besides, reading about the park would really defeat its purpose of visual as well as emotional stimulation. In other words – it really is a place you must experience using all of your senses and becoming a part of the space it inhabits. In fact, the park is so scenic and inviting that I find myself visiting every time I’m in Barcelona and discovering new breathtaking details and reinventing my favorite spots.

The surrounding neighborhood – Gracia, is incredibly charming as well and a must-see sight if you’re in the area. If you’re planning to visit Barcelona, you might want to consider renting an apartment in Gracia during your stay. Although it’s not exactly city center, Gracia is an amazing residential neighborhood with plenty of bars around the beautiful squares and a nightlife of its own. It’s also well connected and just a few metro/bus stops away from the city center or the beaches. That way you could have your morning coffee, tea or other beverage of your choosing in the park, enjoying the scenery and avoiding the crowds that fill the park as the day progresses. Renting an apartment is most often a cheaper option anyway, and choosing a neighborhood like Gracia you would avoid the pricey city center and the hordes of tourists marching down your street.

Imagine that – staying in an authentic Barcelona neighborhood unspoiled by tourist hubbub and being able to walk up to one of the world’s greatest public parks whenever you want!