Getting Around Is Easy in Bike-Friendly Barcelona

Getting Around Is Easy in Bike-Friendly Barcelona 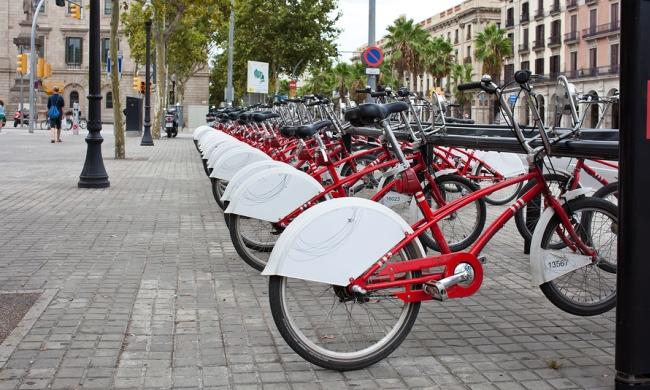 Barcelona’s network of bike lanes and quiet side streets, along with a newfound collective bike-o-phelia, make it one of the world’s best cities for cycling.  Dozens of unique bike tours and unforgettable rides guarantee that once you get started you won’t want to leave the saddle.  When you visit Barcelona, take advantage of the bike-friendly atmosphere and get your exploring done on a two-wheeler.

Calorifically speaking, the most efficient way to travel is to eat rice and ride a bike.  It would be a crime to eat only rice while visiting the gastronomic paradise of Barcelona (plus, the food pyramid reminds us of the importance of fruits and vegetables), but there’s no reason you can’t hold up the second part of the equation. Barcelona is a large city with lots to see, and you can cover more distance if you do it on two wheels. Thanks to a bike-friendly attitude and a comprehensive network of paths and lanes, you don’t have to be  professional downhill mountain biker Missy Giove to explore Barcelona by bike.

Cycling had its renaissance in Barcelona around 2007, after the government did a survey and found that fully 90% of residents wanted improved bike infrastructure. Shortly thereafter, a network of bike paths and bike lanes popped up around town and the city’s own bike-share program, called Bicing, was launched. Visionary organizations like Bicicleta Club de Catalunya helped further the pedal-power movement by presenting in schools to get ‘em started young, and by offering adult cycling classes for old dogs who want to learn new bike tricks. Years of increased awareness, government/activist cooperation and continued efforts to promote two-wheeled transportation have earned Barcelona a consistent spot on top biking cities lists, and there’s no going back now.

The best way to get oriented is to spend some saddle time interfacing with a true local who can give you the lowdown on all the latest lanes, not to mention the rules.  Barcelona offers a wide array of bike tours to fit any personality on two wheels. Places like Go Bike Barcelona and Budget Bikes have a variety of programs available that promise to show you the city’s main attractions and then some. Budget Bikes even lets you book an “A La Carte” tour, wherein you tell the guide where you want to go, and they must obey.

Steel Donkey Bike Tours does unique (no two tours are alike) trips around town that focus on anti-sights and things that most tourists wouldn’t even think to access. The truly niche cyclist might want to stop by the Sant Jordi Gracia Hostel, the self-proclaimed “Fixie Hostel,” to get an idea of what Barcelona’s hip and brakeless crowd is into these days. While you’re there, ask if any Hardcourt Bike Polo teams need a third player.

Once you’ve got your (ball) bearings and you’re ready to go rogue, the entire city is at your fingertips. Unfortunately, Bicing’s slick red machines are off limits to tourists (unless you’re booking your Barcelona apartment for a year or two) but you can still take advantage of the more stationary effects of the bike renaissance.  As of 2010, one in ten streets have bike lanes, and the network is always growing. The government releases a map every year with updated lanes, paths and routes throughout the city that you can find at any bike rental shop or tourist info point. You can also check this Google heat map to see where people travel the most by bike.

Perched high atop your iron steed, you can go from the Barri Gotic to Parc Guell in just minutes, or get on the Av. De la Diagonal highway and cut through the entire city like a hot knife through butter. The boardwalk along the Mediterranean lets you lazily slalom pedestrians and palm trees, and you could make a day of just going back and forth along its 5 km stretch and playing witness to a circus-caliber variety of characters. To channel your inner Lance Armstrong, get involved with a road biking meetup group that can introduce you to the scenic gems and smooth asphalt surrounding Barcelona.

Whether you’re visiting Barcelona for a few days, a few weeks, or longer, don’t miss the opportunity to explore the city on two wheels.  You’ll cover more distance, see more sights, and interact with the streets in a unique and exhilarating way—and in bike-friendly Barcelona, you can ride easy without threatening your health or your sanity.