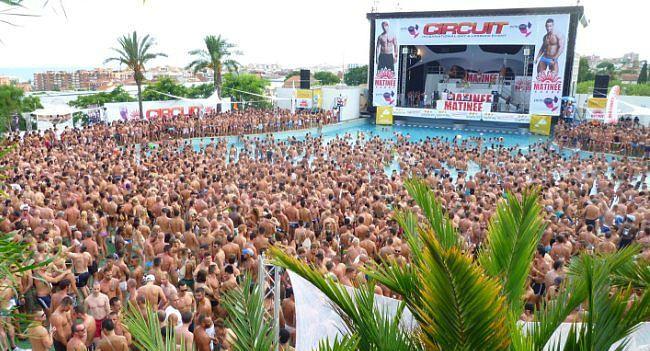 Barcelona Pride, taking place in June, is indeed huge and a lot of fun, but despite its international reputation and visitors coming from across the world it is in fact only the second largest LGBT event in Barcelona! It is the Circuit Festival in August that has managed to surpass Barcelona’s Pride festival and position itself as Spain’s main gay event of the summer and one of the biggest international LGBT festivals!

Only 6 years old this year, Circuit festival is one of the fastest growing festivals in Europe and it’s completely dedicated to the national and international LGBT community! The crew behind Circuit realized that there is a big gap in terms of entertainment, leisure and holiday offers that are able to satisfy the increasingly diverse and demanding LGBT audience and created the Circuit Festival which became a huge success over the past 6 years! Growing in number of attendees as well as venues and parties on offer, this year’s Circuit is expected to hit the 100,000 attendees mark offering unprecedented LGBT entertainment for 10 whole days and spread across numerous venues! Big and small parties, sports activities, film screenings and lectures that are all organized in the framework of the festival attract people from more than 50 countries, who come to Barcelona to live their sexual orientation freely and have a great time in arguably one of the most ” gay-friendly “ cities in the world!

Events and parties are spread across several locations and are divided between those targeting gay men and those that cater to the girls (Girlie Circuit), but many events and parties are also mixed. This year’s festival is scheduled to start on August 8th with a huge Opening Beach Party and end on a similar note on August 18th. The Girlie Circuit program is shorter though and only offers events for five days – August 13th through 18th. Although the official program of the festival is not yet confirmed, based on the previous years there are a few events you can count on and should plan on attending! For girls, these include LezzGo! Party (last year, the venue was Razzmatazz – one of Barcelona’s best night clubs!) but also the famous La Leche party which stands out as one of the best parties every year.

For boys, the must-attend parties include the WE Party scheduled for August 10 (to be confirmed), The Week at Privilege BCN (rumour says August 16), the Water Park Day party at Illa Fantasia which was a huge success last year, and of course the La Lache party which is planned for the last day (August 18) at the famous L’Atlantida in Sitges.

These are just a few of the parties planned for this year’s Circuit festival, but the program will include many other parties and cultural events scattered around Barcelona as well as the surrounding cities like Sitges and Vilassar de Mar (both located about 30 minutes’ drive/ride out of the city center). The full program should be announced in the following weeks so make sure to check it out at the

You will also soon be able to buy your tickets which will set you back €300 for the whole festival pass, or you can get single event tickets which cost anywhere between €20 and €70, depending on the event you would like to attend.

The increasing success of this festival taking place in midsummer, just a couple of weeks after the Barcelona Pride, is also evident by the growing number of nationally and internationally reputed artists who perform at the festival. Last year’s hit was Loreen (the winner of the Eurovision Festival 2012), but other big names included Vega, Offer Nissim, Vanessa Klein and Uh Huh Her. This year is said to be even bigger and better so keep your eyes and ears open for the big names!

With tens of thousands of people coming to the city for Circuit alone, and August being a busy tourist month anyway, it’s best that you start planning your accommodation as soon as possible if you intend on visiting the festival. Barcelona has many apartments that you can rent short-term, and this is most often a cheaper and definitely a more convenient alternative to hotels or hostels. Most importantly, if staying in an apartment you’re free to take guests home after a night out at the festival or a day out at the beach and this seems to be their highest selling point during the festival days when apartments are hard to find. So start planning on time and book your accommodation and festival passes in advance so you can truly relax and enjoy the fun without worrying about tickets and accommodation which will definitely be overpriced during the festival itself.

Finally,take a look at the short promo video for Barcelona Circuit 2013. A bit cheesy, yes, the video is funny and offers a glimpse of what you can expect to see at the parties there. But be sure that you’ll see a lot more diversity than what the video shows because the festival really is open to everyone! So hurry up and join the fun! –