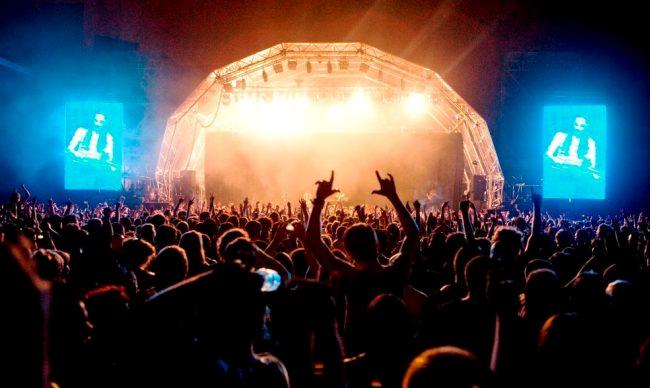 Barcelona has a lot to celebrate, so it’s no surprise that the city hosts two major music festivals every spring/ summer.  The first is Primavera, which exhibits a wide variety of genres and draws more than 100,000 fans.  The second is Sónar, which leans toward eccentric sounds (but who doesn’t, these days?) and New Media performances.

Whether they were there or not, or even alive yet or whether their parents were alive yet, everyone has their own fantasy of re-living Woodstock.  Plenty of festival organizers are there in answer, from Bonnaroo to Balaton Sound, offering up that quintessential ‘60s experience, albeit heavily corporation-sponsored and security-staffed to the max.  These days you won’t see Jimmy Hendrix tonguing his guitar strings to the climax of “Foxy Lady,” but you won’t have to be so vigilant about that infamous brown acid either.  The spirit of modern music festivals has certainly evolved along with the music, the fans, the politics and the drugs—but the basic idea is as unchanging as a rock: gather together, listen to really loud music for days on end.  Barcelona’s urban music festivals are no exception, bringing crowds of 100,000+ and cranking it to 11 since 1994.

The “Spring” festival is more a celebration of the beginning of summer, taking place in the end of May or beginning of June.  This festival has something for everyone, but mostly you’ll see Pitchfork darlings and trendy Just-Made-Its starting off their festival tour, somewhere between Coachella and Iceland Airwaves.

Where: Parc Del Fòrum, a massive seaside quadrangle of concrete adjoining the Barcelona International Sailing Center, just a few kilometers Northeast of the Old Town.  If you book an apartment near the center, you’ll have no problem getting to the festival.  If you get up early enough you can walk; otherwise, Barcelona’s stellar public transit can get you there in minutes via one of 5 daytime busses and two night busses.

In the park, you’ll find upwards of six stages of various sizes, conveniently named after your favorite brands like “Adidas Originals” and “Vice,” never missing an opportunity to indoctrinate.  Just toward the center from the venue is a public beach where you can cool off, and the Rambla Prim to the west is a great place to take a tree-shaded stroll through the neighborhood if the crowd’s making you paranoid.

Who: Close to 200 acts are scheduled to perform in 2013, spanning genres and decades. In no particular order, you’ll hear music by the likes of Animal Collective, My Bloody Valentine, Blur, The Jesus and Mary Chain, Dinosaur Jr., The Knife, Wild Nothing and Wu-Tang Clan.

How Much: Full-festival tickets are currently a steep 250 EUR, with day tickets running 90 EUR.  But plan ahead!  If you’re coming next year, get your tickets in advance because early birds get big discounts.  You can get tickets online or around town once you get to Barcelona.

Sónar is rapidly approaching its 20th anniversary (2014 will be the year), and is Barcelona’s premiere-and-only International Festival of Advanced Music and New Media. A little bit like an avante-garde South by Southwest, this festival is as much about networking as it is about reveling.  Given the theme, Sónar is a great place for artists, videographers, inventors and various geniuses and crackpots to exhibit their talents and gain some press exposure.  The flipside is that it’s also a great place to find out what’s pushing the envelope these days in any of the four available dimensions.

Where: Sónar is divided into two venues: Sónar by Day and Sónar by Night.  Day Sónar takes place in the massive and very central Fira Barcelona 1 (Fira Montjuïc), with a focus on the concrete “lawn” offered by Plaça de l’Univers, just a hop and a skip from the traffic-and-transit hub of Plaça d’Espanya.  If you’re touristing, you’ll be stopping by this spot anyway, so you might as well have a look inside!  Within the Sónar by Day complex, you’ll be forced to choose from a steady barrage of must-see concerts, films, performances and exhibitions.  It may be light outside, but things can still get freaky—curiosity and enthusiasm for the New will help you make the most of it.

Sónar by Night happens in Fira Barcelona 2, or the Fira Gran Via L’Hospitalet, just a couple of kilometers Southwest.  The SónarBus directly connects the two venues between 8:30 PM and 8:00 AM and costs 2.50 EUR per ride, so you won’t have to worry about navigating the streets after an all-day pregame.  Sónar by Night picks up where the beat left off, remixes it and then invents an entirely new genre.  This all-night party is further subdivided by atmosphere into Sónar-Club, Lab, Car, and Pub.  Some are self explanatory, but if you want to know about the rest, you’d better see for yourself.

Who: Sónar by Day will bring you acts both old and shiny-meme-new. Think: Liars, Chromatics, Sébastien Tellier, Darkstar, Oddisee and We Like Turtles.  And many, many more.  Sónar by Night will showcase some big names in keeping-the-party-going-all-night, so be sure to do what you have to do to stay awake (legally, of course).  Kraftwerk is planning a 3D show for this year’s festival, and Skrillex is performing the same night.  You’ll also catch Two Door Cinema Club, Pet Shop Boys, Jurassic 5 and, again, many more.

How Much: Full passes are 175 EUR, but you can break it down and get a 2-night ticket for 115 EUR, or single night tickets (66 EUR) or single day tickets (40 EUR).  Buying in advance is recommended, because the festival box office charges a 5-15 EUR fee on any of these.

Both of these festivals have great official sites with almost flawless English translations: