Barcelona – A city you can’t help falling in love with!

Barcelona – A city you can’t help falling in love with! 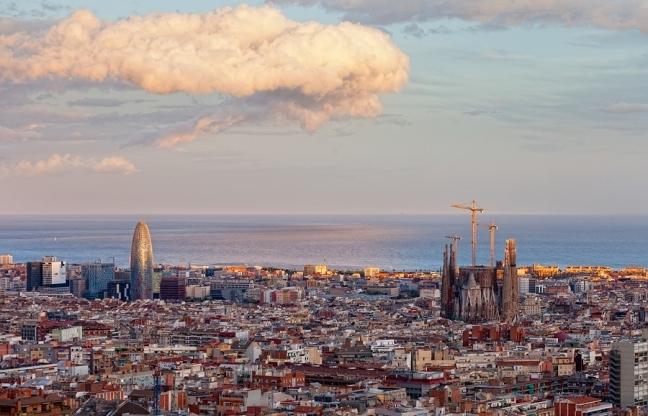 For the last two decades Barcelona has been steadily climbing the list of Europe’s top tourist and traveler destinations, attracting more and more visitors each year. Recently, it has managed to find its way among the likes of London, New York, Rome and Paris and was included in the Forbes top 20 most visited cities in the world for 2012. This, of course, is not without a reason. Now come stay with us in your own Barcelona apartment located in all city neighborhoods.

So what makes Barcelona so attractive to so many visitors? On the one hand, Barcelona is located on the picture-perfect Mediterranean coast, bounded by the beautiful Serra de Collserola ridge to the west and two rivers (Llobregat and Besos) to the north and south. The stunning beaches, both within the city proper and outside of it, together with the faultless Mediterranean climate are enough to satisfy even the most demanding travelers looking for a perfect combination of sea, sun and relaxation.

On the other hand, Barcelona is also the largest metropolis on the Mediterranean Sea, with about five million people living in the metropolitan area. Combine this with the fact that Barcelona is considered one of the world’s major global cities, with Roman roots and an immensely rich cultural heritage (including 9 UNESCO World Heritage Sites!), and you’ve got yourself a promise of a content-packed and unforgettable experience, no matter the time of year you choose to visit!

Truly, Barcelona is one of the very few cities in the world that manages to satisfy the most diverse types of visitors who always leave the city enchanted, in love, or at the very least – happy to have visited. No matter the reasons why one may come to the city, or what they’re interested in, Barcelona always has something in store and simply cannot disappoint!

If impressive architecture and heritage sites are your thing, you’ll not want to miss the famous Park Güell, Palau Güell, Casa Milà, Casa Batlló, Casa Vicens, and of course the unfinished Sagrada Familia Catherdral (all  works of Barcelona’s most famous architect – Antoni Gaudi). Also, be sure to check out the impressive concert hall Palau de la Música Catalana and the modernist Hospital de la Santa Creu i Sant Pau (both designed by Lluís Domènech i Montaner and included in the UNESCO World Heritage Sites), and just walk around the Barri Gòtic, the center of the old city of Barcelona showcasing both the remains of the old Roman city and a multitude of impressive modernist buildings surrounding the narrow alleys and numerous squares.

Museums are also one of Barcelona’s main attractions and there are quite a few of them you might want to pay a visit. If you are interested in art, you will surely want to drop by the National Museum of Art of Catalonia and the Barcelona Museum of Contemporary Art. Furthermore, the Picasso Museum holds an impressive collection of his early work, while the Fundació Joan Miró holds many of his own works but also works by Magritte, Greenaway, Chillida, Rothko, Tàpies, Saura and a host of young experimental artists. Finally, the Fundació Antoni Tàpies is home to one of the most complete collections of his own work, but also hosts temporary exhibitions, symposia and public lectures.

A number of museums also cover the fields of archeology and history and amongst them are the City History Museum, the Archaeology Museum of Catalonia and the Museum of History of Catalonia. There are many other museums you might be interested to check out and these include the Cosmocaixa (former Science Museum which won the European Museum of the Year Award in 2006), the Ethnological Museum, Museum of Geology, Zoological Museum, Barcelona Maritime Museum, L’Aquarium de Barcelona, the Music Museum (Museu de la Música), several sports museums such as the famous FC Barcelona Museum or the Olympic and Sports Museum Joan Antoni Samaranch, and a host of other “more specific” museums such as the Erotic Museum or the Chocolate Museum.

If relaxation and fun is what you’re after, Barcelona’s sure not to disappoint! Check out one of the beautiful city beaches such as the popular and centrally located Barceloneta beach stretching over 1000m and lined with dozens of restaurants and nightclubs along the boardwalk. If you want to avoid the crowds and have some more space around you, try the Bogatell or the Nova Mar Bella beach located further north from the city center but still easy to get to. Finally, the original Mar Bella beach is your choice if you’re looking for a nudist and/or lesbian and gay oriented beach.

Nightlife is yet another one of Barcelona’s fortes so be prepared to party like never before! They say New York is a “city that never sleeps” but this description also perfectly, and quite literally fits Barcelona, especially if you’re there during the summer months. The nightlife, like the city itself, is varied and quite spectacular. Bars and cafés are open all day long, but clubs usually get busy only after 2 am. Whatever type of music you are into, you’re sure to find a café, bar or a club that plays your tunes. Many of them are located in the city center (Barri Gòtic, El Raval or the port/beach area) where even aimlessly walking you’re bound to find a good place to spend your night, but don’t be afraid to do some research or talk to some of the locals and find out more about the current hip places or the clubs and bars that specifically play music to your liking. An all-round super-club (offering five separate spaces!) that’s definitely worth everyone’s visit, even if clubbing is not your thing, is Razzmatazz – Barcelona’s most famous nightclub located in the Poblenou district. The Eixample (popularly known as “Gayxample”) district is packed with lesbian and gay cafés, bars and clubs and is home to one of Europe’s liveliest gay and lesbian scenes and some would say the best nightlife!

With shopping malls and outlet stores scattered around the city, Barcelona is also one of the best shopping destinations and was named the third Top Global Fashion Capital in 2012 by the Global Language Monitor.

But Barcelona still has a lot to offer. It is home to two UEFA elite stadiums including the Europe’s largest Camp Nou (FC Barcelona) and the Estadi Olímpic Lluís Companys used for the 1992 Olympics in Barcelona. It is also home to the Barcelona Royal Tennis Club which hosts the Open Seat Godó – a 50-year-old ATP World Tour 500 Series tennis tournament, and Circuit de Barcelona racetrack which hosts the Formula One World Championship and is located just outside of Barcelona, in Montmeló.

Finally, Barcelona has a lot of venues for live music and theatre, including the world-renowned Gran Teatre del Liceu opera house, the Teatre Nacional de Catalunya, the Teatre Lliure and the Palau de la Música Catalana concert hall. The Barcelona fair (Fira de Barcelona) also holds dozens of events each year and you should definitely check the calendar for the dates you plan to visit!

Although hotels and hostels are dime a dozen, they do tend to be somewhat pricy due to the high influx of tourists from across the world. Short-term apartment rentals are a great option and often a cheaper alternative to hotels and hostels, especially if you’re not traveling alone. Most of these apartments are also perfectly located in the central districts and well equipped, offering full privacy, internet and home-entertainment sets and even a home-cooking option.