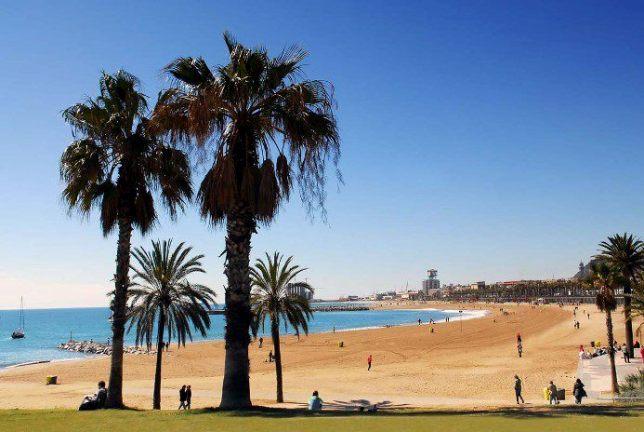 Barcelona’s dramatic landscape makes for a wealth of stunning views, from the city hilltops and the mountains behind as well as from the sea below. These vantage points offer a unique way to get to know the city—just stash a snack and some binoculars and you’ll be ready for an afternoon on the town (literally). Our Barcelona apartments are found in all neighborhoods of the city.

Antoni Gaudí’s masterpiece of Catalan Modernism is perhaps Barcelona’s most iconic viewpoint. Perched in the hills above Gràcia, the park’s playful, colorful walkways and walls offer enthralling views of the nearby neighborhoods as well as the rest of central Barcelona as it stretches toward the Mediterranean.  You can easily plot out your sightseeing course from these heights, with must-see gothic and Modernista spires piercing the skyline as a preview of what awaits you (and your camera) below.

The gigantic Norman Foster Collserola Communications Tower looms precariously over the hills behind the Sant Gervasi neighborhood, held aloft by a single column and several thin cables.  Nevertheless, it’s been standing since 1991 when it was built to broadcast the Barcelona Summer Olympics, and today it’s still in use as a radio tower as well as a tourist attraction.  Finding the tower is easy no matter where you are in the city, but getting to it can be tricky without a car or a cab.  You can take public transportation to the edge of the city, but it’ll leave you with a 2.2 km uphill hike.  You can also take the Tibidabo funicular (below) and walk along the ridge to the Torre.

Tibidabo is like Disneyland in the sky, complete with a full amusement park and all-inclusive birthday party packages.  Situated at the apex of the Collserola Mountains, the site also includes a magnificent Catholic church (not unlike Disneyland’s Cinderella Palace) and further down, the aforementioned Torre Collserola.  While the torre’s obsevation deck is undisputed as the city’s highest point, Tibidabo offers an attractive package in their Sky Walk, which grants admission to several rides as well as freedom to roam the panoramified grounds at your leisure.  They also offer plenty of cheap options for getting up the mountain without giving yourself heatstroke – Take a look at the park’s transportation page for more info.

Possibly Barcelona’s most convenient vista, Montjuïc Castle is easily reachable from anywhere in the city center.  Montjuïc Mountain was first fortified in 1640 and the structure, in some form or another, has seen its fair share of action throughout the centuries from the likes of Napoleonic troops, anti-revolutionary bombs and firing squads. In fact, the area was a military prison all the way through 1960, when it was given to the City of Barcelona and finally opened as a museum.  Today you can make an afternoon out of visiting the grounds and wandering from garden to garden along shady, meandering pathways.  Once at the top, you’ll be privy to unrivaled views of the Port of Barcelona and the Ciutat Vella.

For some of the best views, let the city do the work for you.  While you relax on the beach, Barcelona climbs the hills in the distance to offer you scenic skyline views from the comfort and safety of sea level.  Try the Barceloneta beach, itself one of the city’s most popular attractions, and marvel at what a difference a few dozen meters of open space can make.  Skyscrapers to the right, the Ciutat Vella in front of you and mountains in the distance on all sides make this panorama a must-see on any trip to Barcelona.