The stunning Parc de la Ciutadella is a real must-see during your short stay in Barcelona.

The stunning Parc de la Ciutadella is a real must-see during your short stay in Barcelona. 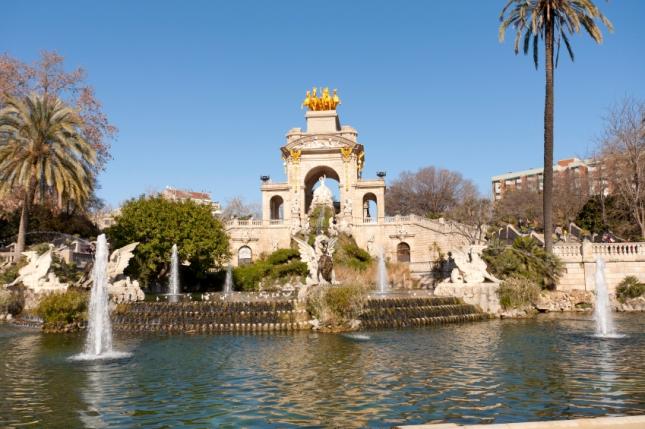 Often regarded as the lungs of the old part of Barcelona, the stimulating Parc de la Ciutadella extends over thirty hectares of land and provides a nice contrast to the ever-busy Ciutat Vella, offering the passers-by a welcome opportunity to hide in the shade of luxuriant greenery, to take pleasure in a laid-back stroll along the wide promenades and to enjoy the moment in a very tranquil setting composed of bright and colorful flowerbeds, exotic palm trees, a small boating lake and a large zoo, but also featuring lots of remarkable works of architecture and museums to catch the eye.

Although the park seems today to be an oasis of peace, the ‘behind story’ of its origin is much more complex and, sadly, dramatic. The grounds on which the park now stands formed the district of La Ribera. In 1714, after 13 months of siege, Barcelona fell to the army of king Philip V of Spain, who decided to enhance his position by erecting a military post – a five-corner citadel which upon finishing turned out to be the biggest fortress in the whole Europe of the time! Much of La Ribera was destroyed to make space for the military facility and many local inhabitants became homeless. No wonder that the citadel remained a much-loathed symbol of the Spanish government. Although the neighborhood was reconstructed in another location (today’s Barceloneta), the citadel was still seen as an intruder by the citizens of Barcelona, so when Juan Prim, a Catalan general, handed over the already much-destroyed military complex to the city in 1869, its demolition proceeded further and after 1878 only three facilities survived – the Governor’s palace, the chapel and the arsenal, which became a home to the Catalan Parliament.

And as for the park itself, the first efforts to transform it into a public space were taken in 1872, but the works progressed rather slowly. Still, the advent of Exposición Universal de Barcelona – Spain’s first international Exposition, scheduled for 1888 – accelerated the process of conversion . From the early 1880s onwards the redevelopment of the area involved addition of several important landmarks like sculptures and other works of art and architecture, including the ornamental Cascada in the northern corner of the park or the Castel dels Tres Dragons – a building designed by Domenech i Montaner, inspired by medieval architecture and serving as a restaurant during the Exhibition in 1888. Yet, the history of urban planning of the place is a totally different (and quite lengthy) subject, so let’s focus on the highlights of this green urban garden – and there are quite many of them!

If you arrive from the north-west (and this is the best way to start your visit to this place, by the way), you’ll probably come across the massive Arc de Triomf soaring above the area and marking the beginning of a green route leading to the entrance of the park. Follow the passage between the two complementary routes of Passeig de Lluis Companys to the south-east and the moment you cross Passeig Pujades, you’ll be facing the gate ‘guarded’ by two large statues. Enter and enjoy a leisurely stroll along the vast green spaces and charming alleys lined with a host of fresh trees and shrubbery. And as you proceed through this wonderful maze of nature and architecture, make sure not to miss out on the most important sights; to make it easier for you, let me present you with a subjective (though hardly questionable, I think) overview of the major local highlights.

The western wing of the park

Even before you cross the gate at Passeig Pujades you’re bound to see a big red-bricked building on the right side of the park. This is the aforesaid Casetel dels Tres Dragons – today a home to an exciting Zoological Museum (since as early as 1920), where you can catch a glimpse of an enormous skeleton of the whale and many other fascinating permanent exhibits. This ‘castle’ is also a fine example of the Catalan spirit of modernism – though the inspiration by the then-famous Amsterdam Stock Exchange is more than visible – and functions as a great local landmark, but if you continue along the longest western path, you’ll notice another big building. Despite the similar time of construction, the difference in style is more than evident – after all, its architect, Josep Amragós, drew much inspiration on steel-and-glass creations (like the Eiffel tower), which resulted in a perfect facility for a winter garden – the L’Hivernacle; in the summer it also becomes a home to a very nice café and a place where you can enjoy some live jazz music from time to time. Continue along the main western path and look again to the right – you’ll see a Roman-styled building with thick columns, high windows and statues at its entrance. This will be the Geological Museum, built according to the neo-classical design by Antoni Rovira i Trias, in 1882, becoming also the first museum in Barcelona. Much of the investment was funded by Francesc Martorell Pena (hence the museum being often called the Martorell Museum) and today the museum features a rich, unique collection of rare rocks and minerals. The last building in the row is the impressive Umbracle – another innovative design by Amragós, involving creation of a wood-brick palmhouse with a vaulted wooden-slat roof; though the facility may not be in the best condition, it still appears as a very special feature of the park.

The central, northern and eastern section With the western wing taken by different buildings serving diverse purposes, the northern, central and eastern parts of Parc de la Ciutadella remain more ‘natural’, open and recreational. The thick labyrinth of green-leafed trees will channel you through the place and the provided labels will be surely helpful in identifying and telling the difference between nettle trees and lindens, Canary and blue palms, Corsican and Australian pines and many more! The very central part of the park is occupied by a charming lake – you are free to rent a boat and float on the water, surrounded by huge palm trees and other lush greenery. Alternatively, you can sit down on a bench and relax to the sound of leaves rustling in the wind. This amazing park is ideal for such blissful moments, but it also adopts a more ‘stately’ face, emphasized by the abundance of beautiful sculptures and other works of art. The most impressive of them is found in the northern section of the park and is commonly known by the name of Cascada (meaning ‘waterfall’); if you see a small pagoda-like gazebo, then this landmark is just ahead. Its size might seem overwhelming at first, but with all the surrounding greenery and the shiny surface of the water it seems to be an inseparable element of the place, like if it has been here since always. If you look closely, you will also notice that the small podium in the centre of the monument in the middle of this magnificent work of art can be accessed via stairs in the form of giant pincers of huge crabs. Among all the impressive horse- and griffin-like sculptures there are also some human characters to be spotted and one of them is Venus standing atop the fountain on an open palm, and at the very top of the whole structure you’ll see the Quadriga de l’Aurora (the golden chariot) – a glorious figure of a chariot rider with four horses. The whole waterfall consists of two and the pathway through the stairs is arranged in such a way that you can easily circle the object and get to the most northern corner of the park or move a bit up and admire the water body and its surroundings from a different perspective. Either way, La Cascada is something bound to keep you occupied for a good bit.

Far at the southern end of the park stretches yet another complex of buildings and garden-like arrangements creating the Plaça d’Armes – a parade ground located right in front of the parliament building. It was designed in 1916 by J.C.N. Forestier, a French civil engineer. There is a small, lovely pond where you’ll also find a replica of ‘El desconsol’ (Distress) sculpture by Josep Limona, considered by many as one of the most significant works of art in the park. Behind the pond and the thick hedge you will finally see the majestic building of the Parliament of Catalonia. It is usually closed to visitors with the exception of the first Friday of each month – then it is possible to enter the place with a guided tour (in Catalan only); other dates of opening are 11 and 12 September – the period of national holiday in Catalonia. Inside the building you can admire the exhibits of the  Museu d’Art Modern. And to the very southern end of the whole park area, there is the Parc Zoologic – the city zoo. With over 7.500 of different animals and about 13 hectares of surface area, it is a place much adored by both children and adults alike. Anyone keen on wildlife should be fully satisfied, given the abundance of diverse species – including gorillas, dolphins, cheetahs, snow leopards or alligators. The zoo used to be also a home to Snow Flake – the albino gorilla, which, sadly, died in 2004. The zoological park seems to fit the setting of Parc de la Ciutadella perfectly, complementing the otherwise ‘still’ nature and architecture with the exciting view of lively, playful animals. Yet, there is one species which enjoys special popularity and is very willing to be photographed – I’m talking about the large mammoth preserved in the form of a hairy statue found in the park. And where exactly? I don’t want to spoil all the fun, so try to hunt it down yourself – let the adventure begin!

Parc de la Ciutadella is located in the strict city centre, with the picturesque Ciutat Vella on its western side and the chic and modern Poblenou on the eastern site. It is open from 10:00 till dusk and you can access it from several metro stations: leave at Barceloneta station and head north, get off at Ciutadella / Vila Olimpica and go west or stop at Arc de Triomf and proceed south; the entrances are on Passeig de Pujades and Passeig de Picasso. The park itself is open to the public free of charge; fees apply for admission to the zoo and are the following: € 19.60 for adults and € 11.80 for children between 3 and 12 years of age. Still, you can get a 20% discount if you have the very useful Barcelona Card with you.