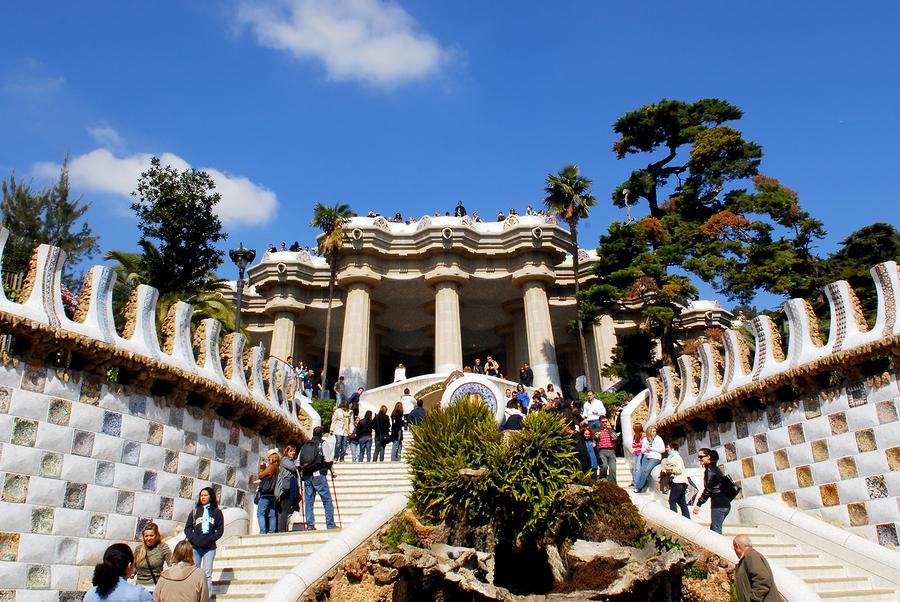 Park Güell is a place which seems to reflect the spirit of Barcelona’s modernist heritage in the best way possible – after all, it was created by the one and only Antoni Gaudi and that’s why it exudes a magical, stimulating and a bit surreal atmosphere, making you feel as if you were a character of a fairy tale. Still, apart from the plenty of amazing sights found all over the place, the park offers also an additional attraction in the form a breathtaking view of the city available at its highest point – a true reward for all those willing to accept the climbing challenge.

As one of top five most frequently visited spots in Barcelona, Park Güell should come as an obligatory item on your to-do-and-see list when you visit the capital of Catalonia. Many see it as a place full of surprising creations of architecture and bizarre objects of wonder, but most of all it is an amazingly-well-designed public space open to local and visiting communities, where people can taste the artistic visions of one of the most forward-thinking architects of the time and to enjoy the moment, drinking in the impressive character of this park where magic meets reality. It all started out in the early 20th century with Eusebi Güell’s intention to create a large and fancy residential garden village (inspired by English architecture of the time) for local aristocracy. The plan was to build around 60 housing objects and several public facilities, but when the project was commissioned to Antoni Gaudi and his companions – Josep M. Jujol and Francesc Berenguer, they gave free rein to their imagination and working from 1900 to 1914, came up with an extraordinary creation featuring vivid accents, rich ornamentation and unusual shapes and forms. In the end, the enterprise turn out to be a commercial failure as not a single house was sold, but all that seemed to fit the site perfectly, forming somehow a smooth blend with the natural surroundings. Further, the city became the owner of this property in 1918 and opened it to the public four years later. Thus, Güell’s ‘private city’ became the favorite destination of both local and global visitors in search for something exceptional, inspiring and, simply, fun.

Park Güell is located on the hill of El Carmel, so reaching it alone is a bit of a challenge, but the awaiting reward is really worth the effort. The 17.18 ha of surface area make it one of the largest architectural works in Europe and the inclusion in the UNESCO World Heritage Site by the name of “Works of Antoni Gaudi” additionally highlight its special value. However, despite its unique worth and great artistic significance, don’t think of Park Güell in terms of an ossified museum full of dust-covered exhibits you cannot touch, but rather try to look at it as an Alice-In-Wonderland-type adventure park. Indeed, the place tempts you with colors, serpentines, irregular shapes and intriguing features, so once you’re on the spot, indulge in a stimulating stroll around this fabulous setting – it really is an unforgettable experience. And let me mention some of the highlights you should definitely tick off on your list.

There are two of them and you probably won’t miss them even if you try – they are the two buildings right at the entrance to the park. Many say that the immediate association on catching the sight of them is that with Hansel and Gretel’s Gingerbread House – and it is hard to disagree with that, in fact! The two seemingly iced-topped structures with deliciously-sweet-colored tiles surrounding the large, irregularly-placed windows look like some large-scale models, but upon a closer inspection you’ll surely notice that they are truly solid pieces of architecture, and that they form a great set of showpieces to catch the attention of the passers-by. An interesting fact is that there used to be two life-sized mechanical gazelles at the entrance to the park, but, sadly, they were destroyed during the Civil War.

Although the stairs alone remain rather purely functional than decorative, the fountains that you will be passing on your way up will blow your mind with the abundance of colorful mosaics. It is also where you’ll find the famous el drac – the sculpture of a dragon (technically, a salamander), considered the symbol of the park – and much loved by children, standing in hordes in queues to take a photo with the stone reptile. Older audience should in turn appreciate the beauty of compositions made up of glass and broken ceramics, constituting one of many trademarks of Gaudi’s groundbreaking approach to art.

The mysterious ‘Room of 100 Columns’

Finish your march up the stairs and take advantage of the reward – now you’ll be able to hide in the shade of a roomy pavilion erected on 86 Doric columns on the terrace; notice that the actual number is different than that used in the name of this room, hence some confusion. Anyway, this magnificent chamber proves especially useful in the summer, but apart from being an oasis for all the ‘sunhaters’ out there, it is also a marvelous work of architecture – the whole ceiling is covered with concavities presenting many diverse motifs, mostly depicting mythological, astrological or religious symbolism.

The museum is found in one of the two completed houses. Actually, the house – known also as the Casa Museu Gaudi – used to be a home to Gaudi and his family between 1906 and 1926, but was designed by Francesc Berenguer – one of Gaudi’s disciples. For a small entry fee you will be able to admire lots of drawings, furniture, mirrors and other items belonging to the architect, some of them taken from other of his creations – the Casa Batlló, the Pedrera or the Palau Güell. A visit to the museum is surely a good occasion to see this remarkable artists as a regular person – there are also many interesting personal possessions of his on display.

The squiggly Serpentine Bench and the spacious Gran Placa Circular

This extraordinary creation, designed by Josep M. Jujol, is said to be world’s longest bench and I’m sure that if you try to embrace it in its entirety, you’ll find it really hard to disagree with this statement. It encircles another great landmark of the park – the Gran Placa Circular, which was to be a local marketplace, but has remained an open space. The ceramic shards of various hues line the surface of the intriguing structure of the bench but its function goes far further than pure decoration – the seat is surprisingly convenient, all the more if you consider the fact that it is made of stone! How’s that possible? Well, here’s a twist – legend says that Gaudi, much known for his unconventional way of thinking, made one of the workmen take off his pants to sit in soft plaster and record a model for the correct anatomical curves and employ it at full length of the bench! At the time it was regarded ‘strange’, but from the perspective of over a century we can say that Gaudi laid the foundations of ergonomics without any intention to create such a groundbreaking trend! Anyway, you better have a seat and see for yourself. And at the same time you can admire the astonishing view of the cityscape and the Mediterranean Sea in the distance – a moment really hard to describe.

The peak and the picturesque panorama

No visit to Park Güell is complete without reaching the very top – the stone cross that marks the highest point of the place. Climb up the stairs of the stony mound and enjoy the unlimited view of the surroundings – on a sunny day you can spot all the major landmarks of the city, including FC Barcelona’s Camp Nou training grounds, La Sagrada Familia, Agbar Tower, the towers of Placa Catalunya and the Mediterranean Sea gently washing the beach of Barceloneta – no words can replace the actual impression of such moment, so you better plan your trip to include that in your agenda.

The most common way to reach Park Güell is to get to Lesseps metro station, but be prepared for a 20-minute walk up a quite steep angle – and this is a bit of a challenge on hotter days. So, if you wish to make it easier, you might consider leaving at a further metro station – Vallcarca, from which you will be able to start your explorations already from the peak of the park (there are escalators to take you there) and descend gradually to lower parts of the place. Of course, the order of sightseeing becomes reverse, but it is up to you to decide – either way, be prepared to devote at least half a day for your visit to the park, as it is quite extensive.

There’s also an option to take one of the two buses which stop right at the entrance to the park – no. 24 goes from Placa Catalunya and Poble Sec and no. 92 arrives from the direction of Glories and Port Olympic.

The admission is free of charge – the only fee you have to pay is that charged for the entry to Gaudi museum; the cost is € 5.50 for adults, € 4.50 for students and pensioners and children under 10 accompanied by adults are allowed to enter for free.