Parc del Guinardó – one of the largest public parks in Barcelona

Parc del Guinardó – one of the largest public parks in Barcelona 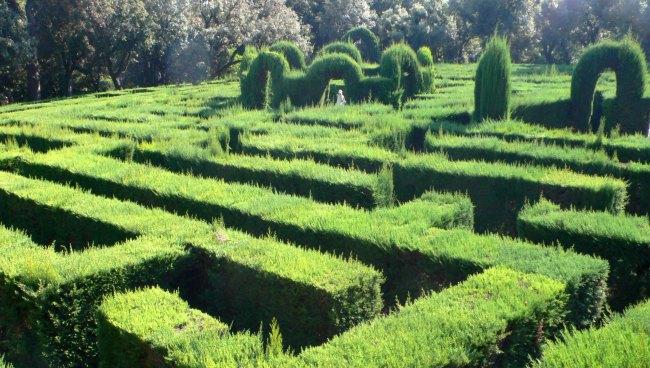 The bountifully green and impressively diversified Parc del Guinardó is one of the largest public parks in Barcelona. Although the park is very leisurely in its character, the way up to its central part is quite a challenge as it is located on rather steep hills, so typical of this part of the city. Yet, the scenic surroundings of the nearby districts offer some breathtaking panoramas too and the abundance of green spaces makes it really pleasant to stroll around. Of course, the highlight of the available landscapes awaits you directly in the park, so better gather your strength and prepare for a whole day of adventure in the lovely setting of stimulating greenery, picturesque hills and wonderful sights wherever you turn your eyes.

Parc del Guinardó in a nutshell

Before the end of the 19th century the area of Horta-Guinardó used to function as an autonomous village, but with the advent of the 20th century it got included in the borders of Barcelona, marking the north-western edge of the city and providing access to many fabulous natural landscape locations like Parc del Carmel, Parc del Laberint d’Horta and – of course – Parc del Guinardó. The latter stretches over a vast part of land, sloping from Turó de la Rovira down to Avinguda de la Mare de Deu de Montserrat, with the main entrance on Plaça del Nen de la Rutlla; I’m sure you’ll recognize it easily by the landmark statue of a child spinning a hoop amidst a circle of flowers. Still, I have to tell you that this beautiful urban part of the park is a far cry from the wilderness that you’ll encounter as you proceed deeper into the dense green thicket, because Parc del Guinardó is composed of three quite distinct parts, but more on that below.

Another interesting thing is the name of the park. I’ve learnt that the name ‘Guinardó’ is related to a an old house standing near the park and called Mas Guinardó (now a district community centre, as far as I’m aware), though the origin of the word ‘Guinardó’ alone can be traced to ‘guinarda’, which in turn means ‘fox’ in old Catalan language. Still, this is not the only ‘behind story’ I’ve been lucky to hear. Another story tells of Miguel de Cervantes’ visit to Barcelona and his stay in the aforementioned house, which appeared to have been a property of Perot Rocaguinarda – a famous bandit of the time and so the name might actually be contributed to this historical figure. Yet, despite the uncertainty of the descent of the name of Parc del Guinardo, the fact that this place is a true highlight of the area is more than undisputed.

Inside the park – the city part

When the park was first opened to the public in 1918, it didn’t look as it does in the present. A major renovation was carried out in 2007, but what you will see today in the lower level of Parc del Guinardó is the result of the redesign from 1977. The architects of the landscape were Lluís Riudor i Carol and Joaquim M. Casamor i d’Espona and their design included extending the park area down to Plaça del Nen de la Rutlla, which eventually, with all the well-groomed hedges, several ‘floors’ with stairs and plenty of banks to sit at and relax under the crowns of all the fresh trees growing around. And they come in plenty! The majestic Aleppo Pines, the thick mulberry trees, olive trees and elms, all lend their shade to the passers-by. As I came there in the summer – which I also recommend to you, the attraction I enjoyed particularly was actually the beautiful yellow carpet formed by the falling flowers of the rosewood trees – a sight so warm that the municipal gardeners tend to leave those flowers lying until they decompose naturally. A small thing, but very heart-warming indeed.

As you step up the stairs further and further, continuing along a set of multiple embankments, you’ll finally reach…

This part of the park was designed as a tranquil garden with lots of wonderful features of natural landscape architecture, the latter ascribed to Jean Claude Nicolas Forestier and Nicolau M. Rubió i Tudorí. It opens with a lovely spring by the name of La Font del Cuento with old stone inscriptions right above it. It is a truly magical place, adding to the lush atmosphere of this section of the park and if you follow the steps and paths, you’ll notice that the course is aligned with the stream running through the area , leading to a small water reservoir at the top; this reservoir also marks the first viewing terrace where you can enjoy the magnificent view of the city, but bear in mind that even better panoramas await you a bit further. Another thing which I found quite stunning was the plenty of small waterfalls and ponds found here and there along the way through the maze of thick, neat hedges – I’d expect a ‘secluded’ place like this to be scarce in life, while it surprised me with the presence of blooming vegetation, including a special type of bright-red-colored flowers, which – as I found out later – belong to a plant called Lobelia laxiflora, which is in turn said to quite a rarity in Barcelona. So, not only is this park an exciting labyrinth of rich vegetation – including an impressive selection of carob trees, cedars, Holm Oaks or cypresses (not that I’m a specialist – I was lucky to meet a group of visiting German botanists who were kind enough to teach me about the names and typical features of the local trees), many of which were really big, but it also is a kind of ‘reservoir’ for unique flora. As this exciting park has got three different faces, don’t be surprised when the charming path bordered by fragrant laurels, oleanders or lavender (once again, all the names appear thanks to the said group of botanists; Lukas, if you’re reading this – thanks a lot!) leads you eventually to…

Well, maybe not exactly ‘wilderness’, as there is some space developed by the municipality of Barcelona , but I’ll come back to that after a brief description of what to expect from the last section of this marvelous park. This part of Parc del Guinardó is the biggest of all three – the steep slopes are covered with thick woods creating a truly amazing formation, a kind of amphitheatre-shaped grove composed of big trees encircling the highest part of the historic section. The theme of forest continues down the hill intersected with paths and plains where you can usually see people cycling, playing with dogs, throwing Frisbee or simply picnicking under the clouds, in the glow of Catalonian sun.

As there is so much natural space available in this part of the park, you would be very right to expect some diversification among it, too! You can enjoy an exciting stroll through a wonderful grove of cedars, but as I mentioned before, there is also a trace of a substantial input from the city of Barcelona – woods of two thousand pines planted almost half a century ago around Mirador de la Mitja Luna observation point – a broad walkway located at the highest level of the park, found right next to a square known by the same name; let me give you a little hint I learnt of on my way back – there is a bus (no. 28) which stops close to this viewpoint, so if you prefer to explore the park going downhill this is the option for you, but do bear in mind all the obvious advantages of a brisk climb uphill – that’s at least the argument I was sticking to in order to boost my sense of achievement when I found out about the shortcut. Still, that’s not the end of the attractions to be discovered in Parc del Guinardó. There’s also one more astonishing vantage point and it offers some truly astonishing views as well. It’s called Mirador de Sant Joan and if you happen to get there on a sunny cloudless day (just like I did), you can enjoy a spectacular panorama of virtually the whole city, with the horizon ending far away on the Mediterranean Sea. One thing I regret is that I didn’t have the time to stay there until the evening – the cityscape after dusk must be splendid, but now since you know how to get there, you can do yourself a favor and finish your trip one level further than me. I strongly encourage you to do so.

The location and entry

The park is open 24/7 – free of charge, so don’t worry about the right time to go there – any time that suits you is good time; however, do consider the heat, especially if you go there in the summer – the trip to the top may take some time, so you better plan your outing to reach the peak not too late (so as to be able to still enjoy the views of the sun setting behind the city). The entrances are found on Plaça del Nen de la Rutlla, Carrer de Florència and Carrer de Garriga i Roca, but I suggest to enter through the first of them – it somehow seems to be the most appropriate introduction to the further development of this outstanding landscape. As I mentioned before, bus no. 28 will take you directly from Placa de Catalunya to the highest point of the park (you need to get off at Carrer de la Gran Vista – Plaça de la Mitja Lluna – it’s the last stop, by the way), but other buses do go around the park as well: no. 31, 32, 39, 55, 74 or 117, but you better verify the schedule once you arrive to Barcelona as – like anywhere else – there might occur some changes.

Parks and Gardens in Barcelona