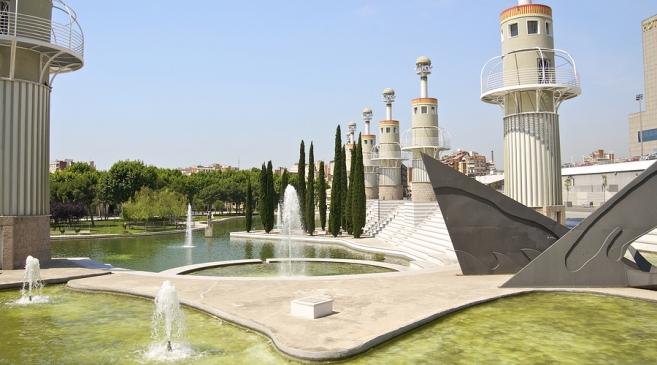 The 4.6-hectare stretch of land found just a bit to the south from Estació Sants – the largest railway station in the area, which provides you with very convenient means of moving around the city (just like the nearby Placa d’Espanya) – is taken by a very spectacular mixture of natural landscape and modern artistic vision. It goes by the name of Parc de l’Espanya Industrial and has been a highly popular relaxation spot since its creation in 1985; it lies upon the grounds of a former textile factory, Vapor Nou and since the locals used to call it L’Espanya Industrial factory, the name has clung to the site and became synonymous with a real thrill and top quality leisure in an unusual and exciting setting.

With the close vicinity to the aforesaid Placa d’Espanya – generally busy and bustling with life and the daily hurly-burly of Barcelona’s citizens, I was really surprised by the tranquility blended with an industrial feel that greeted me when I reached the site of this charming park. Still, I decided to approach it a bit from the north, from the area of Plaça dels Països Catalans (with a nice restaurant called Eden quite nearby – a real treat for those into seafood) and I have to say this was a very good decision. The sight of nine impressive towers soaring above the neighborhood made me feel like if I had been wandering through the world of the Wizard of Oz, while a range of eye-catching, inspiring and often quite ‘outworldly’ creations made my visit a real adventure. As I went on deeper and deeper, the place suddenly changed its mood and gradually became more and more green and ‘natural’, so to speak. And before I get to details, let me just say that if you fancy places where you can unwind in the company of peace and quiet that enjoy a twist of urban and industrial chic, then Parc de l’Espanya Industrial should make it to your travelling agenda as a must-see; another thing is that it’s really worth seeing just to experience the unique combination of green spaces and concrete, which turn out to be able to coexist in harmony if a project is developed by skillful hand. Let me now break the place down into pieces and describe the major highlights you should tick off on your list. By the way, it’s actually impossible to miss out on some of them due to their size, with the most notable example in the form of…

The Dragon without St. George

As you can tell by the name, you can expect some dragon and no Saint George. This is the first of the many fantastic sculptures that I saw when I entered the park from its north-eastern side. With its ample size of about 35 meters of width and at least 10 meters of height (and the weight of 150 tons as I’ve been told), it surely is an impressive sight to the eye of all the passers-by, including travelers like me and you. From what I’ve learned, it was designed in 1987 by a Basque sculptor by the name of Andrés Angel (the park itself is also a work of another Basque artist – Luis Peña Ganchegui). This seemingly ominous creation depicts a dragon coming out of a lake, but when you get closer, you’ll immediately notice children running around and climbing up the body of the monster – the sculpture is made entirely of cast iron, so the youngest take full advantage of it and use it as a slide! The dragon was actually designed for this purpose, but I can only imagine that it may feel a bit embarrassed by its current role of a pet. Still, its bland ‘face’ doesn’t seem to blush, so it may actually be quite ok with it; the children surely are.

The Lord of the Rings and the Two Nine Towers

As you step further, passing by the dragon, you’ll suddenly feel a strange sense of being watched; I immediately thought of the “Lord of the Rings” and Sauron’s tower of Barad-dûr, with Rockwell’s “Somebody’s watching me” playing somewhere in the back of my mind. This impression of surveillance is caused by the presence of the aforesaid nine towers lined along the borders of the park. I guess these Watchtowers are only a decoration, though a very important one, as they seem not only to impart an industrial and a bit futuristic atmosphere to the park, but they also serve as a useful landmark with respect to moving around – once you see at least one of these nine tall structures, you know where you are. And I’m sorry to disappoint you, but in this story there’s no ring – unless we’re talking about…

Well, this artificial body of water may not have a perfectly circular shape. Ok, it’s actually not circular at all, but this does not change the fact that it is an absolutely great feature of this intriguing park. It borders a massive set of light-grey steps from the side of Passeig de Sant Antoni; they seem to form a kind of amphitheater for people to sit and enjoy a book, a conversation with a group of friends, a game of chess, a cup of coffee or a relaxing view of the lower level of the parkland, with a group of cypresses overlooking the water from the concrete platform at the foot of the stairway. I also spotted some boats drifting swiftly on the surface of the lake and later found out that it was possible to rent one, so you can spend a nice time sailing, rowing and rocking on the water out in the sun or in a shade of a sun umbrella (if you remember to take one – and it actually is a good idea, as it gets quite hot in Barcelona at times) in the company of herons and ducks; you can swim safely as there is also a special guard watching you – the majestic statute of the Neptune, designed by Manuel Fuxà for the occasion of the International Exhibition of 1929 and brought back to light with the creation of this exciting park. The Neptune is accompanied by his fellow goddess Venus sitting upon a rock at the edge of the lake; she was also created with the International Exhibition in mind, by José Pérez Pérez, but today the only thing she does is attracting attention of the visitors to the park – not that she doesn’t enjoy it, I guess.

If you’re after some opportunity to unwind in a refreshing and stimulating setting of greenery, this spot has got everything to satisfy you in this respect, too. As I got bothered by the sun a bit (forgot to take my hat), I decided to take some rest in the shade of the trees growing on the lower level of the park. I had to make my way back to the point of entrance and head down a little to reach the large green lawn and to end up in the shady and cool small grove composed of oaks, cypresses, pines (I think) and banana trees, with the latter being especially ‘useful’ in the summer, when they provide a solid amount of shade for the area with public toilets. Further to the southern part of the park there are also a couple of banks, used mostly by parents to sit while their children play climbing the banana trees. All in all, if you look at the park from a certain perspective, you could think of the famous painting by Georges Seurat, “A Sunday Afternoon on the Island of La Grande Jatte” – but with a bit more ‘contemporary’ collection of characters – including you.

Actually – yes. If you explore the area more thoroughly, you are also bound to come across a statue of a woman by the name of “Tors de dona” from 1947, designed by Enric Casanoves. Unfortunately, the original was subject to acts of vandalism and eventually destroyed, but its bronze replica is still in place to the viewing pleasure of the visitors. There is also another important work of art – also a sculpture and also from the same period; entitled “Bous de l’abundància” (translated as ‘Bulls of Abundance’), it was created by Antoni Alsina in 1926 and put to use to decorate this park shortly after it was created. Apart from that, you will also happen to encounter the very futuristic sculptures of “Landa V” (by Pablo Palenzuelo) and “d’Alto Rhapsody” (by Anthony Caro), both with strong references to the industrial character of the park. And there are also some remains of its old past to be found around – the factory building of Casa del Mig is, for instance, now used as a children’s center. There are also many nice sports facilities to be used if you fancy some more active forms of leisure. Moreover, if you enter/exit from Carrer Muntadas, there will also be an old arch awaiting you at the very gate.

A handful of practical info

The park is open from 10:00 am until the evening. The entry is free of charge and the best way to get there is to get to Sants Estacio metro station and head a bit to the south; alternatively, you may leave at Placa de Sants station and follow north-east to get to the said old arch.