Miró, Miró on the wall, who’s Barcelona’s greatest artist of them all?

Miró, Miró on the wall, who’s Barcelona’s greatest artist of them all? 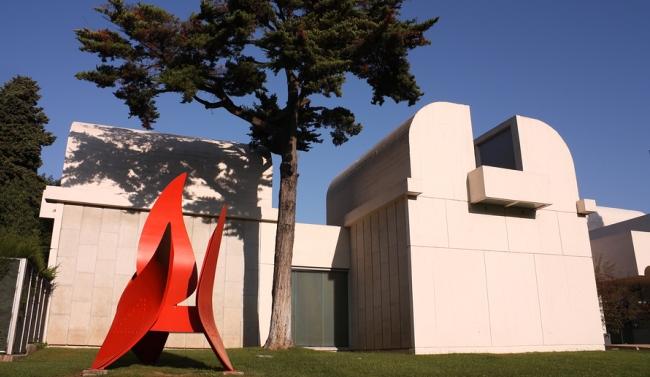 Barcelona’s Joan Miró Foundation has managed to become a major point of reference in the world art scene and offers its visitors not only the greatest and most complete single collection of Miró’s work but also a pioneering exhibition space named Espai 13, which stimulates research and experimentation among young artists and offers impressive exhibitions of contemporary experimental and avant-garde artists. Hosed in a shimmering white temple designed by the architect Josep Lluís Sert, Fundació Joan Miró promises to impress admirers of Miró’s work, but also everyone interested in contemporary and experimental art and modern architecture lovers.

Joan Miró is certainly one of Barcelona’s best-known and internationally acclaimed 20th-century artistic progenies. Ridiculed at first, like many other great artists in the past, Miró quickly became one of the leading surrealist artists of the 1920s, yet he maintained a personal methodological process even when employing surrealist automatic techniques. His antagonistic attitude towards painting most often resulted in dream-like, symbolic and schematic language which fit well within the Surrealist group but often resulted in works interpreted as personal and experimental. A sandbox for the subconscious mind, his work was later interpreted as a manifestation of the Catalan pride.

Already during the 1930s Miró began exhibiting in New York and his work became an influential part of the Modern Art movement in America. New York hosted a large retrospective devoted to Miró in 1972 which, together with the retrospectives in London the same year, Saint-Paul-de-Vence in 1973 and Paris in 1974, was the greatest testament of his international acclaim that had steadily grown during his life. In 1974, Miró also created the famous tapestry for the New York’s World Trade Center which was one of the most expensive works of art lost during the September 11 attacks.

In 1971 Miró decided to bequeath an art foundation to his hometown, which was finally completed and open to public in 1975. The building was designed by Miró’s close friend and famous architect Josep Lluís Sert who created one of the world’s most outstanding museum buildings which is rightly considered a piece of modern art itself. Before designing the Fundació Joan Miró, architect Josep Lluís Sert spent many years as the head of the School of Design at Harvard University after fleeing Spain during the General Franco dictatorship. Light and airy, the building’s terraces and interior courtyards serve to direct the flow of visitors and give the space an open air feel. Resting amid the greenery of the Montjuic Park, the Fundació Joan Miró now holds the greatest single collection of his work including paintings, sculptures, textiles, drawings and much more. The museum holds over 14,000 of his works, but only a small portion of these is ever on display. Furthermore, it is not only Miró’s work that is on display, but also the work of emerging young contemporary artists which was Miró’s condition when he dedicated his pieces to the Fundació. In keeping that word, Fundació created a special space named Espacio 13 (Room 13) which is dedicated only to upcoming contemporary artists and hosts brilliant temporary exhibitions.

The rooms 14 and 15 are together labeled as “Homage to Joan Miró” and hold photographs of the artist as well as a 15 minute video about his life and work. The other rooms all hold Miró’s work spanning the early years all the way to his work from the 70s. The rooms are mostly themed and cover specific years of Miró’s work such as his early years, surrealist years and masterworks from later years. Most rooms exhibit work on a rotating basis but some also hold permanent exhibitions.

Once you’ve seen all the rooms, head outside to the eastern flank of the museum where you will find a small garden with many pieces of modern sculpture. On the way to the sculpture gallery you will also see the famous Alexander Calder’s rebuilt Mercury Fountain which was originally created for the Spanish Republic’s Pavilion at the 1937 Fair in Paris. The sculpture garden (Jardí de les Escultures) is a perfect place to end your tour and perhaps enjoy a small picnic in the shade after a long hard day of sightseeing.

The area around Montjuic is mostly residential and peaceful, yet close enough to the city center (Plaça de Catalunya) which is reachable by metro, bus or even on foot. With so many sights in this part of the city you might want to consider finding accommodation nearby. While there certainly are quite a few hotels and hostels in this neighborhood, short-term apartment rentals are often a much better choice – not only because you can carefully choose your location but also because they offer more comfort, privacy and are frequently a more economical alternative to hotels or hostels. So hurry up and book your apartment and get ready to be awed by this beautiful city and the many attractions waiting to be discovered!