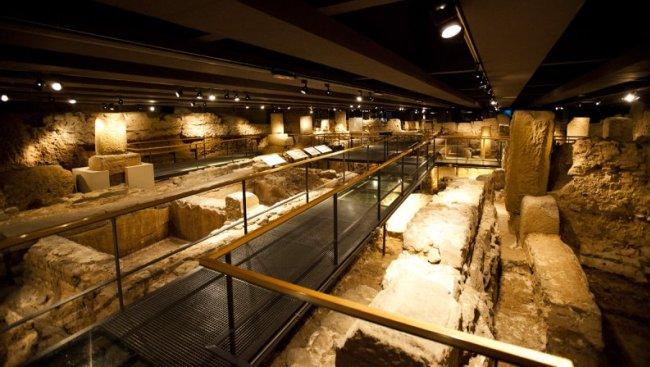 Narrating and interpreting the history of Barcelona from its early beginnings to the halcyon days in the Middle Ages, the City History Museum is the perfect place to truly get to know this city and it’s glorious past. The museum is dedicated to research, conservation and promotion of Barcelona’s heritage but is also an active institution which interprets and explains Barcelona thought its own collections as well as through collections of other museums in the city. Its main draw is the underground ruins and remains of the old Roman city, but the museum has much more to offer to its visitors!

The City History Museum is located in Barcelona’s Gothic Quarter (Barri Gòtic), overlooking the charming square called Plaça del Rei. The museum’s main building – Casa Padellàs, was transported here in 1931, stone by stone from its original location at the Carrer dels Mercaders. With its typical Catalan Gothic Architecture, it was to fit perfectly within Barri Gòtic, but the move proved much more difficult than originally planned. Namely, in 1930 when foundations were supposed to be laid for Casa Padellàs in Plaça del Rei, the excavation work unintentionally uncovered the remains of the old Roman city Barcino stretching underneath the square. Detailed excavations were conducted over the next 30 years and it was then decided that the Casa Padellàs would best be used to house the City History Museum, preserving and including the Barcino remains into the museum exhibition space. Excavations were finally completed in the 1960s and the new museum opened its doors to the public for the first time in 1973.

The exhibitions today are displayed in chronological order. When you enter Casa Padellàs, you will first see several rooms at the ground floor which narrate the prehistory of the Barcelona Plain. After that, you can take the elevator which will take you underground to the Barcino ruins. Barcino was a Roman city founded by Emperor Augustus around 10 BC. The ruins stretch over 4000 square meters and go all to way to the Cathedral of Santa Eulalia. The 30 year excavation project resulted in many objects and artwork which were successfully preserved and are on display now, but more than that, whole sections of the old city are still visible to the visitors. Remains of a wine making facility, a laundry and dying workshop and a salted fish factory from the 2nd and 3rd century are all present in the ruins while videos, models and diagrams serve to further bring the visitors into the Barcino daily life. The underground section also holds ruins of a 6th century church from the Visigoth period, and an abundance of small objects and artwork from all periods of Barcino’s history.

Once you’ve seen the underground section and got acquainted with Barcino, you can move on to the next part of the exhibit which is located upstairs in the Palau Reial Major which used to be the residence of the counts of Barcelona and, later, of the Kinds of Aragon. Built in the 14th and 15th century, this royal complex consisting of three distinct edifices houses a series of displays that speak of Barcelona during the Middle Ages, between the 8th and the 13th century. The city experienced rapid growth in these times, becoming a wealthy Mediterranean capital. Late 13th century paintings on the walls of the The Saló del Tinell depict the conquest of Mallorca by king Jaume I, and Christopher Columbus is said to have reported his discovery of America to King Ferdinand and Queen Isabella in this very hall. The hall is now used for temporary exhibitions.

The tour concludes with a visit to the nearby Capella Reial de Santa Àgata (St. Agatha Chapel), which was built on top of the Roman wall that surrounded Barcino in 1302. The chapel displays a well preserved wooden ceiling and a magnificent medieval altar piece painted by Jaume Huguet. The adjacent King Martin watchtower boasts a really beautiful view of the Old Town and is a great way to end your visit!

The museum’s collection is always growing and it is estimated that between 4000 and 5000 pieces are donated to the museum each year. With new pieces arriving all the time, and temporary exhibitions rotating ever so often, it is no wonder that many visitors keep coming back!  The museum also has a lovely gift shop and an ever-expanding bookstore for those wanting to find out more about the history of Barcelona and its whole region.

The Barri Gòtic and surrounding quarters are quite literally packed with sights, promising days of active vacation and learning experiences, as well as some amazing night life! Consider finding accommodation nearby so not to lose time commuting or finding your way around. While there are many hotels around, they do tend to be overpriced so short-term apartment rentals are usually a much better option. Not only will you save money that way, but you will also have a completely different experience of the city – merging with the locals and “living in your own apartment” – even if only for a few days.