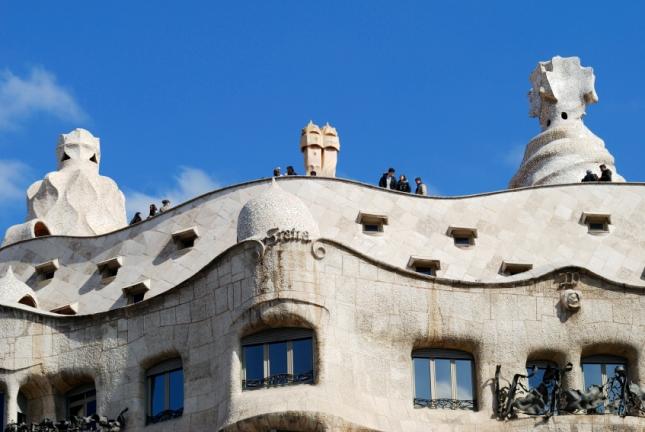 Conveniently situated within Barcelona’s modern Eixample district, along the bustling Passieg de Gracia, Casa Mila or La Pedrera as it is also known showcases some truly exceptional modernist architecture.  Designed by the city’s famous architect Antoni Gaudi in the early 1900s, this fascinating structure is a sight definitely worthy of a visit. In this area you can find a Barcelona Eixample District Apartments.

One of the main reasons why I wanted to visit Barcelona was to view the superb architecture and modernist structures that the city has to offer, many of which can be found within the fashionable Eixample district.  The neighbourhood was originally created as an extension of the city and claimed to offer residents a better quality of life with its wide avenues, increased access to sunlight and purer air.  It was here, along the well-known Passieg de Gracia, that I found Casa Mila – ‘La Pedrera’ and where my fascinating journey began.

Barcelona’s wealthy industrialist Pere Mila commissioned the city’s famous architect Antoni Gaudi to design his home in 1906 and it took six years to complete.  Much of Gaudi’s masterpieces can be found across Barcelona, each one exhibiting his unique style and flair.  Gaudi was in his early fifties when he created Casa Mila, a time when he was said to be at the height of his career, and the project was actually the last civil one which he completed.

As I stood outside this incredible building, which is made up of two blocks of apartments, I completely understood how the stone faced exterior of Casa Mila earned it the nickname ‘La Pedrera’ (meaning stone quarry).  I could not wait to venture inside and explore the remarkable features and exhibitions.  The building was declared a World Heritage Site by UNESCO in 1984 and a ten year restoration project began in 1986.  Today, Casa Mila is the headquarters of the Fundacio Caixa Catalunya and serves as a centre for culture and education.

As I entered, I was overwhelmed by the striking architecture on display.  I had pre-booked my tickets online for the ‘La Pedrera by Day Tour’, prior to my visit, which ensured I had access to the main parts of the building.  My tour began by making my way up to the enchanting rooftop where I discovered the inspiring collection of chimneys, towers, staircases and balustrades.  Several of the towers and chimneys are decorated with something called trencadis, which is broken up ceramic tiles and creates a mosaic effect.

From here, I continued to one of the permanent exhibitions – Espai Gaudi, set within the loft of Casa Mila.  Beneath the beautiful arches, delightful models, photographs and drawings representing the history of Antoni Guadi can be found, each providing an insight into his extraordinary values and lifestyle.  My tour then led me to the ‘La Pedrera Apartment’, an amazing replica of a typical family residence which boasted original décor and artefacts.  The final part of my journey took me into the Exhibition Room which is where the Mila family once lived.  My attention was immediately drawn to the stunning stone columns and the breath-taking staircase with its eye catching iron railings.

I believe that a visit to Barcelona is not truly complete without a trip to Casa Mila/La Pedrera and it is something that I would recommend to everyone.  Brimming with a wealth of history, oozing a delightful array of modernist architecture and offering a truly memorable experience, it is an attraction not to be missed.

More information, including opening times and ticket details, can be found by visiting www.lapedrera.com/en/home.