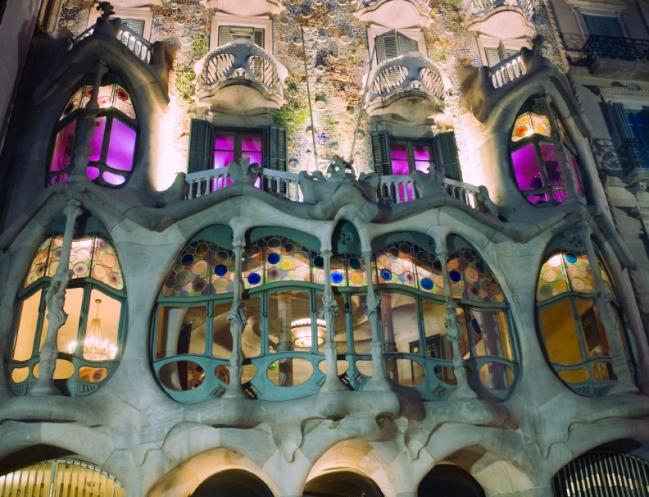 Occupying a prime position along the famous Passieg de Gracia, within the popular Eixample district of the city, Casa Batllo is one of Barcelona’s most incredible examples of modernist architecture.  Designed by the renowned, local architect Antoni Gaudi, this magnificent building offers an unforgettable experience to everyone who visits.

Casa Batllo is undoubtedly one of my favourite attractions in Barcelona and somewhere that I could visit again and again and still be amazed at its superb design.  Oozing a magical, endearing atmosphere, the stunning building is definitely worthy of a visit, and leaves you with a feeling of sheer admiration for the effort that has been put into creating such a remarkable place.  Situated within the city’s sought after Eixample district, an area well-known for its impressive architecture, Casa Batllo can be found at the heart of Barcelona’s bustling thoroughfare, Passieg de Gracia.  Together with its neighbouring buildings, Casa Batllo makes up part of the ‘Block of Discord’ which attracts visitors from all over the world.

The building dates back to the late 1800s when it was a simple, traditional house – a sharp contrast to the eccentric and charming structure that it is today.  Josep Batllo, a local textile industrialist, acquired the house in 1903, commissioning Antoni Gaudi to carry out its transformation which took place between 1904 and 1906.  Gaudi was one of the city’s most prominent architects at that time and was much loved for his unique modernist and art nouveau architecture.

On my very first visit to Casa Batllo, I found myself standing in astonishment at its extraordinary exterior.  The beautiful colours, the whimsical shapes and features and the simply breath-taking rooftop, were something that I had never seen before.  I could only begin to imagine what delights awaited on the inside.  As I made my through the grand entrance, the true magnitude of this fascinating building hit me, it was like walking into a scene from a fairy tale.

I entered via the lower level of the building which was originally used as the coach house and led into the coal cellars, nowadays it is used to host various functions and events.  From here, I made my way up to the main area of the house, the Noble floor, where the Batllo family once lived.  Once again I was taken aback by the amazing architecture and delightful décor.  Unique skylights, which reminded me of tortoise shells, the incredible staircase, the huge windows and the cute mushroom shaped fireplace were just a few of the notable aspects that instantly caught my eye.

Continuing along my journey, I took the spiral staircase up into the loft area where I found the spectacular arches which depict the ribcage of an animal.  Beaming with light and emitting a characteristic Mediterranean feel, the loft is where Casa Batllo’s residents would have stored their belongings and done their laundry.  Finally I made it to the rooftop, the place I had wanted to explore the most.  Boasting picturesque views across the city, the roof was adorned with decorative figures, a variety of colour, quirky chimneys and the fabulous tiled area known as the ‘dragon’s back’.  It was truly magical.

I would highly recommend an adventure to Casa Batllo, which deservedly became a UNESCO World Heritage Site in 2005, to anyone visiting Barcelona.  Opening times, ticket prices and more information can be found on the official Casa Batllo website -www.casabatllo.es/en/