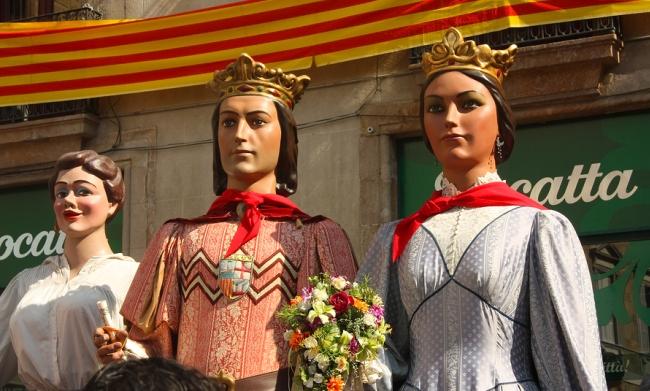 If you’re in Barcelona in the third week of September, you won’t have much choice than to take part in La Mercé, the city’s biggest, most chaotic, entertaining and outright strangest street festival. La Mercé brings the Barri Gòtic’s medieval streets to life with unique spectacles.

Barcelona has celebrated the “Festival of Mercy” in some form or other since the late 1600’s when mass prayer to the Virgin of La Mercé (one form of the Virgin Mary) correlated with the rapid withdrawal of a hoard of locusts.  Barcelona continued to celebrate this historically Catalan holiday even during the Franco years, when being or doing anything Catalan was emphatically frowned upon.  In fact, the festival received the utmost dictatorial complement when it was named the “Fiesta of National Tourist Interest” in 1965.  Fortunately they switched back to the less robotic original name, but the fact still stands that, as a tourist, you should be in Barcelona for La Mercé.

The festival principally takes place over four days in the third week of September, but dozens of other events support and straggle behind the main attractions. If you’ve got a week or so to spare you can participate in a 10K run around Barcelona, see a modern air show AND see the hundreds of concerts, parades, performances and all-around ruckus that fans of Ms. Mercy are sure to stir up. For easy access to any and all events, rent an apartment in the central Barri Gòtic where most of the action will take place.  Lately, the festival’s planners have made a point of spreading events over a wider variety of venues and areas, but all locations are easily accessible by bus or metro.

Events change and develop every year, and the next festival assuredly will not resemble the first, or the last.  The catchphrase of one event is: “So you think you can make music with drums and all sorts of instruments while making a puppet?” Personally, I think I particularly CAN’T do those things at the same time, but I’d love for someone to prove me otherwise.  Other notable one-offs have included art made by hard-rock musicians, beach volleyball tournaments and public library tours—truly something for everyone.

Festival mainstays are notoriously photogenic and give you a glimpse into Catalan peoples’ shared appreciation of esoteric competition, folklore and explosions.   You won’t make it to every event, but be sure not to miss these:

Castellers are specially trained acrobats whose World Championship moment happens during La Mercé.  Troupes set up shop in one of Barcelona’s main old-town squares in the afternoon; in most cases, the crowd is already waiting.  The stockier team members plant their feet and stand solidly while their colleagues climb onto their shoulders to create 6-7 storey human towers.  The tower is complete when a young girl or boy climbs over everyone, reaches the top, and releases a hand to wave at the crowd below.

The “Fire Run” means different things to different groups, but the main participants are usually demons and dragons, representing the Evil side of religion and Catalan folklore.  To the uninitiated, the event looks something like the ritual in Eyes Wide Shut, but focusing on a more explosive fetish.  Costumes and floats equipped with the latest in pyrotechnic technology shower each other and bystanders with sparks and flames while local fire chiefs, severely outnumbered, stand out of sight and nervously twirl their mustaches.  The “runs” usually culminate in a large-scale performance, like any fireworks display except that here the colorful mortars and rockets don’t travel into the air before exploding.

Every year during La Mercé, Barcelona’s already-impressive landmarks become the backdrops for elaborately conceived light-and-sound shows.  Gaudi’s Catalan Modernism is certainly a sight to behold in broad daylight, but the contours and curves of the Sagrada Familia or the Casa Batlló suddenly take on a new purpose when they’re covered in moving colors and filmic episodes.  Get there early for a front-row seat; unlike the Correfoc, these lights can’t set your hair on fire.

For more information, including a complete schedule of festival events, take a look at the official page: merce.bcn.cat/en