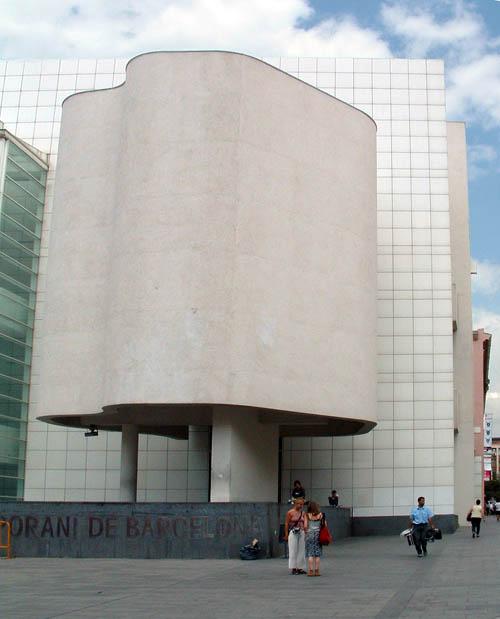 Barcelona embraces its architecture and isn’t afraid of new architectural styles. In this city buildings are as dynamic as the culture where old and new sit side by side or combine to form a new hybrid.

Buildings have always been revolutionary in the city from the humble Catalan arch; the Modernist contributions of Gaudi; through to the Barcelona Pavilion by Mies Van Der Rohe. Barcelona has set itself up on the world stage as a model city and with this comes the need for iconic modern architecture.

El Pavelló Barcelona by Ludwig Mies van der Rohe was built originally in 1929 for the Exhibition and rebuilt near its original location in 1983 at the foot of Montjuïc below the Palau Nacional. At the time it was revolutionary and influenced architecture in subsequent years, even today its use of material and space appears contemporary.

The neo-baroque Palau National (now currently Museu Nacional d’Art de Catalunya) was built for the same Exhibition and while an impressive building the result is an odd pastiche. At the top of Montjuïc lies the Olympic Park with the 1970’s creation by Josep Luís Sert Fundacio Juan Miro a museum dedicated to the works of the great artist. The building’s white walls and arches contrast with Miro’s bright quirky style and was designed by Sert upon returning from exile in the U.S.A.

Also in park is the iconic Torre de Comunicacion de Montjuïc a giant televison antenna. Designed by Santiago Calatrava and built to broadcast the Olympic Games to the world in 1992. Its shape represents an athlete carrying the Olympic torch. The structure also acts as a giant sundial using the Europa square to indicate the hour.

Carrying on the Olympic theme but this time on the waterfront in the Port Olympíc is the fish sculpture by renowned Canadian-American architect Frank Gehry. Acting as a landmark for the Olympic village the icon was a milestone for the Gehry practice being the first project to be designing and manufactured using computer software.

The waterfront was redeveloped for the Games and regeneration of the area has continued since resulting in some interesting buildings and structures.

L’Estel Ferit  by Rebecca Horn is an architectural work of art that resembles a rusting tower, designed to evoke the image of an abandoned lighthouse, echoing the loss of the old maritime ways of Barceloneta.

Well worth a look is the Mercat Barceloneta a neoclassical food market built in the 19th century that needed a revamp. In 2006 this was realised by Josep Mías.  He retained the original iron framework and roof, deconstructed old elements and reconstructed them with new to create a modern market building that has an industrial aesthetic appropriate to the areas history.

A fairly recent contribution to the Barceloneta skyline is Edifici Gas Natural the Natural Gas Headquarters; a glass tower that relates to its surroundings with differing heights and elevations yet makes a statement at the same time.  Designed by Enríc Mirrales and Bernedetta Tagliabue (EMBT), and completed in 2006 the fragmented reflections of the building in it’s own mirrored façade creates an almost kaleidoscope quality.

A stone’s throw away by the same duo in Sant Pere is Mercat Santa Catarina, a complete contrast to the previous market offering in Barceloneta, this old/new hybrid is a riot of colour. This time EMBT have taken an old market and given it an undulating vaulted roof covered in bright Catalan hexagonal tiles that are reminiscent of the fresh produce for sale beneath. The view from inside is almost ecclesiastical with a high vaulted wooden ceiling, well worth a visit.

Probably one of the most iconic of the new buildings in Barcelona is Jean Nouvel’s Torre Agbar; Barcelona’s answer to London’s Gherkin.  Found in the Poblenou district adjacent to Plaça de les Glòries Catalanes it was opened by King Carlos in 1995. The building houses the Aigües de Barcelona (The Barcelona Water Board), 4500 LED lights light up the façade at night on separate panels which by day relects the sun and emulates the movement of water. The shape was supposedly influenced by Mont Serat and the shape of water geysers.  The shape is also reminiscent of a 1908 proposal for a New York Skyscraper by Gaudi and the tiles echo a façade of the nearby Sagrada Familia.

Also worth a mention is the Universal Forum of Cultures by Herzog & De Meuron situated at the sea end of Av. Diagonal. The building is seen by some as an icon for New Barcelona but for some it is a folly. The building has lain empty since the Forum in 2004 and is showing signs of neglect, though as a piece of architecture it is interesting, it’s massing, shape and dominance is unique.

Finally I have to mention the Museum of Contemporary Art or MACBA designed by the American architect Richard Meier; a gleaming white palace in an otherwise bohemian district of Raval. The sculptural elements of the exterior remind me of Gehry’s architectural style while the ordered interior with rows of columns and ramps is reminiscent of Le Corbusier – together these conflicting styles are successfully combined to produce a fine modern building and an exemplar gallery.

Fortunately we have a large selection of apartments close to all of these locations for you to choose from in and around Montjuïc, Barcelonetta, Raval, Sant Pere and Poblenou.  You can guarantee wherever you choose you will not be too far from some of the city’s amazing modern architecture!